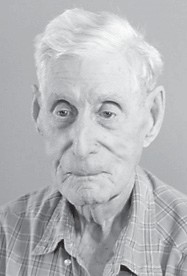 He left home for World War II and landed on the beaches of Normandy in 1944, and later that year fought in the Battle of the Bulge, serving three tours in the U.S. Army in General Patton’s Fifth Army.

He later worked in the coalmines and at General Motors in Detroit, Mich., and worked for 35 years as a job setter for Rolling Mills.

He was a 32nd degree Mason.