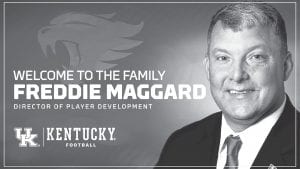 One extra benefit from having former Kentucky quarterback Freddie Maggard as the director of player development for the University of Kentucky football team could be an uptick in in-state recruiting.

Maggard will not directly be involved in recruiting but he’s well known across the state to high school coaches and players. His presence at UK could impact decisions in-state high school players make.

“Maybe coach (Mark) Stoops does not like the trend of UK football having trouble getting in-state players to commit,” former UK punter Jason Todd, an assistant coach at Lincoln County, said when asked about Maggard’s hire. “I know last season was the first time in over 70 years that UK football did not sign a player from the state of Kentucky.

“While Freddie was not hired as a recruiting coordinator, I think his presence will be beneficial when it comes to connecting the current UK program to the state’s players and coaches. I look forward to seeing the positive impact that Freddie will have on UK football.”

So does former UK player Grayson Smith. He’s glad current and former players will have someone to help “them transition to their professional life” and also serve as an advocate for the players.

“Obviously there is a recruiting caveat tied into the hire. Simply put, in-state recruiting has not gone well lately and Freddie will be able to provide ‘indirect’ support in that area probably without being counted against the coaching position allotment the way the NCAA counts,” Smith said. “So I would consider it a very creative and calculated shrewd move.”

So would I. It’s the type of creative thinking that UK basketball coach John Calipari does. No rule breaking, just taking advantage of a way to get an influential in-state presence on the football staff.

“Tell me what Mama and Daddy wouldn’t want a positive, disciplined man around their son. The quality character Freddie brings and his military background tell you all you need to know about what he would bring to the table,” former UK center David Hopewell, who came to UK from Alabama and was on the 10-1 team in 1977, said.

“Freddie will also bring another set of eyes to the table on evaluating recruits and player breakdown on their progress,” Hopewell added. “I believe the UK football staff loves and respects him already. More than anything I hope his winning thoughts and championship expectations will be contagious to every UK player and prospective player we bring in.”

Maggard spent 13 years with the National Guard as the community relations and outreach liaison. He also managed the Kentucky National Guard recruiting command’s marketing and advertising department for three years.

Some media speculation has

J. Washington already leaning to stay in the NBA Draft even though mock drafts have him listed anywhere from 50th to 63rd — late in the second round.

“That’s all just speculation about what he’s going to do,” Paul Washington said. “I am amazed to see something almost every day about something P.J. is going to do or not do. I guess that is how some people make money and keep a job by throwing stuff out there.

“It’s frustrating to me. Where do they get that stuff? People believe it and form opinions based on that misinformation. It’s crazy. It’s ridiculous. All that stuff is just opinions but the only opinion that matters right now is P.J.’s and he’s still trying to gather all the information he can.”

Three teams have already inquired about having P.J. Washington come in for a pre-draft workout. Paul Washington noted that each year more and more players are taking advantage of the evaluation process before making a draft decision.

“We don’t do this every day. We will talk to Cal (John Calipari) and (UK assistant) Kenny Payne and others. We want to utilize the experience of the coaching staff. They do this every year with players. We don’t,” Paul Washington said.

Players who have not hired an agent have until May 30 — 10 days after the draft combine — to withdraw from the draft and return to school to maintain their eligibility.

“We’ve got the combine and we will make a decision after that,” Paul Washington said. “As of now, nothing has changed. Until you hear it from P.J., nothing is official no matter what you might read or hear from others. That’s just speculation because, believe me, nothing has changed.”

Masthay had a successful sixyear NFL career with the Green Bay Packers, where he was on a Super Bowl winner. He averaged 44.2 yards per punt in his six seasons.

He came back to Lexington a little over a year ago with his wife, Amanda, and their three children.

During a 45-minute conversation with him recently, I asked him to remind me about how he ended up living in a closet his sophomore year at UK. That question arose after the told me he was “locked in a closet in case chaos came up with his kids” during our phone conversation.

“I really did basically live in a closet for a year,” Masthay laughed and said. “I had a friend on campus and I was over at his house. He knew I was looking for a place to live. He said, ‘We have this utility closet. I will charge you $100 per month to live here.’”

Masthay accepted the offer that helped him save money out of his football scholarship check. By the time he graduated, he had saved more than enough money to buy an engagement ring for his wife, Amanda, and they were married before his NFL career took off.

“It’s just one of those great memories you have from college, but it really did let me save money to buy an engagement ring so that made it all worthwhile,” Masthay said.

Masthay also was just one of four UK players to twice earn all- SEC academic honors before his graduation in 2009.

The only two Kentucky players to return a punt for a touchdown in the last 10 years are Charles Walker and Randall Cobb.

Cobb is now a distinguished receiver with the Green Bay Packers while Walker went from walk-on to scholarship receiver in his four years at UK and is hoping for an invite to a NFL training camp.

“It’s kind of funny it was him that is the only other guy with a punt return touchdown in the last 10 years,” Walker said. “I was a sophomore in high school and he stayed at my house during the (Kentucky) Derby. He left me a picture and signed it, ‘Always chase your dreams.’ I have that hanging in my room now.”

But what was Cobb doing at his house for the Derby?

Turns out Walker’s parents had rented the house to Cobb. Walker believes former UK basketball stars Anthony Davis and John Wall were renting a neighbor’s house at the same time.

“I really wasn’t supposed to be home but I went. My parents were not there but Randall and (former UK basketball player) Darius Miller were there watching some NBA game on TV. I got kind of star struck and I’m not even sure I knew my name. But it’s a great memory to have.”

Freshman Casey Sartore of Henderson County comes from a UK family and always knew she wanted to attend the University of Kentucky. Once she started dancing in the seventh grade, she also hoped to one day be on the UK dance team.

She just completed her first season with the team and admits it’s hard to put into words what that meant to her.

“I kind of get emotional thinking about it. I have met my best friends on this team and I don’t know what I would do without them,” she said. “It’s amazing to dance in front of all these people. It is a dream come true. I have worked for this my whole life to get a chance to be one of the girls who gets to do it every game. It’s just amazing.”

“She pushed me and we worked for it and that’s all I wanted ever since I started high school. To get to do it is just awesome,” Sartore said. “Not all teams are as close as we are. There is never really drama or anything.

“I know that’s hard to believe, but we are all just best friends and have each other’s backs. We know any day at any time we could turn to our friends on the team for whatever we need and that has made this dream even better for me.”

Quote of the Week: “You have got to protect your body. Once you get close to numbers, you can not be afraid to slide or step out of bounds. Just going up the field I try to beat you with my speed if you are a safety or linebacker. If you are a 6-3, 250-pound linebacker, I am going to slide. I am not going head on with you,” UK quarterback Terry Wilson on how to protect himself if he scrambles/runs.

Quote of the Week 2: Every game I go to she makes three plays that could be in the (ESPN) SportCenter Top 10. She would play shortstop for every team in the country. She’s my 11-yearold daughter’s hero,” Kentucky softball fan Adam Sowder on UK junior shortstop Katie Reed.

Quote of the Week 3: “A passionate saleswoman told me to imagine my face was a canvas and to create my masterpiece. I didn’t have the heart to tell her that art was the only subject I failed at during elementary school,” UK softball coach Rachel Lawson before the CATSPY award show.