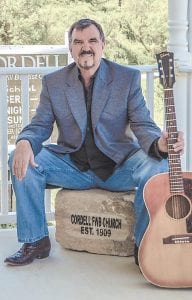 Larry Cordle, above, and Dave Adkins, below, will perform a free concert in downtown Whitesburg on May 31. It is the first concert in a series of 10.

Kentucky Music Hall of Famer Larry Cordle joins rising bluegrass music star Dave Adkins in a rare duet performance on May 31 in the inaugural Levitt AMP Whitesburg Music Series, a 10-week run of free concerts that will be performed at Mountain Heritage Village in downtown

At last count, Larry Cordle’s songs have appeared on projects that have sold more than 55 million records, by artists such as Ricky Skaggs, Alison Krauss, Rhonda Vincent, Garth Brooks, George Strait, Trisha Yearwood, Reba McEntire, Diamond Rio, Alan Jackson, Trace Adkins and many others. He has multiple No. 1 hits on both Billboard Country and Bluegrass Today charts.

Adkins’s recent album, “Right or Wrong,” topped the Bluegrass Today charts and features a collaboration with Cordle, the No. 1 song, “Blood Feud (Hatfields and McCoys).”

There is no mistaking the raw and powerful vocals of Elkhorn City native Adkins. His significant chart success and stellar live performances have made him one of most talked about artists in acoustic music. His self-titled album “Dave Adkins” debuted No. 1 on Billboard’s bluegrass charts in 2016. 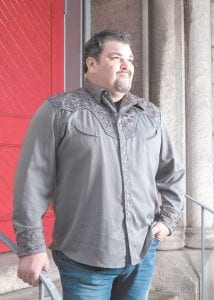 Adkins and Cordle began writing songs together about a year ago. This live collaboration is a one-time opportunity in a concert setting.

Sunrise Ridge starts the music at 6 p.m. Adkins and Cordle hit the stage at 7 p.m. All Levitt AMP Whitesburg shows are scheduled to end by 9 p.m.

The Levitt AMP Whitesburg Music Series, presented by Appalachian Regional Healthcare, brings free live music to downtown Whitesburg for 10 straight Thursdays from May 31 through August 2. The series features a variety of genres from bluegrass to blues, classical to old time, Latin to legendary rock and roll in a family friendly environment.

The community is invited to bring a picnic, blankets and lawn chairs to the concerts. There’ll be food booths and the Whitesburg Farmer’s Market will be open from 3 p.m. until till 7 p.m. Mountain Comprehensive Health Corporation will offer different health information and screenings each week.

The Levitt AMP Whitesburg Music Series is supported in part by the Mortimer & Mimi Levitt Foundation, a private foundation that empowers towns and cities across America to transform underused public spaces into thriving destinations through the power of free, live music.

The late Mortimer Leavitt, who died in 2005 at age 98, was a clothier who made his fortune selling tailored shirts to celebrities. He was also an outspoken patron of the arts. In 2018, nearly 500 free Levitt concerts will take place in 26 towns and cities, all featuring a rich array of music genres and high caliber talent. Learn more at levitt.org.

Visit levittamp.org/whitesburg for a full schedule of concerts, directions and information on parking and wheelchair accessibility.