Fresh from touring with Allman, guitarist Simo to be here Friday 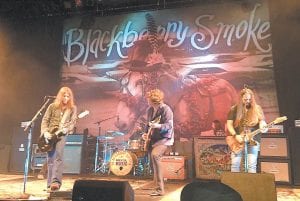 GUITARIST J.D. SIMO AND BAND HERE FRIDAY — Rock guitarist J.D. Simo, pictured here (center) performing with the band Blakberry Smoke in Indianapolis over he weekend, will peform at Summit City in Whitesburg on Friday (March 20). In addition to performing songs with bands such as Blackberry Smoke, Simo has been touring with rock legend Gregg Allman. A video of Simo’s peformance on slide guitar with Blackberry Smoke is available on YouTube.

To say that rock guitarist J.D. Simo has been busy since he last visited Whitesburg early last fall would be quite the understatement.

In addition to preparing for the release of a new album and continuing to headline smaller venues with his three-piece band SIMO, the 30-year-old guitarist from Nashville has been getting welcome attention by opening several shows on rock legend Gregg Allman’s current solo tour of the U.S.

This past Saturday, Simo opened a Gregg Allman concert in Toledo, Ohio just one night after performing in Indianapolis with the rock band Blackberry Smoke, whose member invited Simo onstage for a blistering version “Deep Elem Blues.” (The performance can be viewed on YouTube if you’re interesting in seeing for yourself just how well Simo can play the guitar.)

This Friday night (March 20), Chicago native Simo will return to Letcher County for his fourth appearance at Summit City in Whitesburg, then travel to Knoxville, Tenn., the next night for a performance at the Preservation Pub.

Who is Simo is and why you should go see the band perform has been described well by writer Jeff Fox in PM Beat, an entertainment publication covering the Parkersburg, West Virginia and Marietta, Ohio area:

“The Simo Band features rising guitar phenom JD Simo,” wrote Fox. “Simo was born and raised just down the street from Wrigley Field and cites Chicago’s musical diversity as a large influence on his playing. Interestingly, Simo was not only influenced by many Chicago blues legends such as Howlin’ Wolf and Sonny Boy Williamson, but Elvis Presley as well.

“Simo would find himself living in San Francisco and Phoenix, and left home at the age of 15 chasing the desires only a guitar prodigy can envision at that young age. He would essentially be schooled in the music business by Don Kelley as he traveled with (Kelley’s) Nashville based band. Simo would hone his skills and refine his technique under Kelley, whom Simo sometimes refers to as ‘a good high school football coach’ pushing him to work harder than anyone could imagine.

“As Simo grew in musical stature he became in demand for session gigs throughout Nashville music circles, all the while beginning to put the pieces together for the Simo Band. With the help of bassist Frank Swart and drummer Adam Abrashoff, Simo has laid the foundation for an opportunity to truly be expressive and creative with his musical gifts.

“But don’t expect your traditional and predictable blues from Simo. From 70’s rock power chords, to intricate flowing solo’s, to licks so catchy you’ll be infected with a boogie groove, the Simo Band brings a unique, energetic sound … and when Joe Bonamassa refers to Simo as ‘the greatest out there right now’ … it’s simply not to be missed!”

Admission to Friday’s performance by Simo is $15. Opening the concert are area performers Ryan Kendrick and the band Earth By Train of Wise County, Va. Persons wishing more information may call Summit City at 633-2715 or promoter Greg Napier at 606- 434-8648.