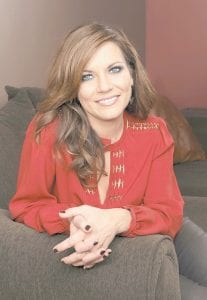 Martina McBride was looking for that spark you get when you know you’ve discovered your true match. The country music star found it in Scott Borchetta and his Big Machine Label Group.

McBride’s new album, “Eleven,” is her first for Republic Nashville, ending a two-decade association with RCA that included 18 million in album sales. But at 45, she finds the switch invigorating, and it has pushed her in directions she never really considered before.

Those days with RCA, she says, were good ones and the split was amicable.

“But it’s also good after that long being in one place, to be able to transition to a place that has people that are just super, super excited about you,” McBride said. “Sometimes in a long relationship, there comes a time when you just need to shake it up a little bit, and this feels like the first days when I was at RCA. Everything feels brand new again, and that’s really a great thing, especially this far into a career.”

Borchetta was very interested when he learned McBride wanted to talk about joining his group, home to other tops stars like Taylor Swift, Reba McEntire and Rascal Flatts. And why not? She’s one of country’s veterans and remains one of its most lauded singers. She’s up for female vocalist of the year next month at the Country Music Association Awards again, seeking a record fifth win in the category.

The label head thought there was more to McBride than the public generally sees, though. He encouraged her to write more songs for “Eleven” than she had on any of her previous 10 albums, and he also thought she should get out of town while recording.

“ I think there’s a definite change in trying to dig another layer deeper on who Martina McBride the artist is, because this record perhaps is, I don’t know if you can say the most personal, but definitely extremely personal. We really pushed her to have it come from her point of view.”

McBride, who also hired new management and brought in new co-producer Byron Gallimore during this period, found the label’s support liberating. It reinforced her growing confidence to tackle intimidating things like songwriting.

She co- wrote six of the 11 tracks. There was the lead single “Teenage Daughters” that arose from a disagreement with her oldest daughter. “Long Distance Lullaby,” about being away from home, also grew out of an idea about three daughters. And then there’s “Always Be This Way,” loosely inspired by Train’s “Hey, Soul Sister” and Jason Mraz’s “I’m Yours,” which she wrote because she “just wanted to write something fun.”

“Really the first time I kind of walked in and said I want to write a song about this, it was with ‘Teenage Daughters,’” McBride said of a songwriting session with brothers Brad and Brett Warren. “It was so crystal clear to me, like it was so from my life and so real, it wasn’t even work — ‘I want to get this down, I want to express this.’ For me, that was a huge step forward as a songwriter.”

That sense of self-discovery continued in the recording of “Eleven.” She took Borchetta’s advice and headed to Atlanta, despite the fact her husband John owns one of Nashville’s top recording studios, the sprawling Blackbird Studio. She found that, with distance, her creative mind didn’t shut down around 3 p.m. when mom mode was supposed to begin taking over.

“I don’t think I’ve ever made a record that had so much of my attention, especially since I had children,” McBride said. “And I love that. I feel like I gave the record the attention that it deserves, and I think that you can really hear the difference.”