Freshman has skills, confidence to contribute at linebacker spot

He’s realistic about how difficult it can be for a true freshman linebacker to play in the Southeastern Conference. However, Trevin Wallace is also confident he can be a contributor for Kentucky this season.

“I know it is pretty tough to do as a freshman and that most freshmen playing in the SEC are probably at safety, corner, running back, maybe receiver,” Wallace said. “The SEC is the top conference at linebacker. Playing as a freshman is kind of ridiculous right now.

“It is crazy, but I feel really comfortable about it. I feel I can play. I want to play. However, I am also fine with getting gradually brought in at the middle of the season to get experience.”

The 6-2, 220-pound Wallace says senior middle linebacker DeAndre Square has helped him more than any other player and has become his mentor.

“He is really smart and someone I really look up to,” Wallace said.

Square likes what he has seen from Wallace.

“I like his size and love his confidence. He also listens and is not a guy who thinks he knows it all. I think he’ll be an important part of the defense,” Square said. 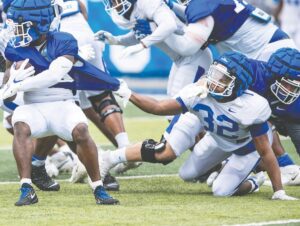 Freshman Trevin Wallace (32) has the speed, size and power to make a lot of plays for the UK defense. (UK Athletics Photo)

Linebacker coach Jon Sumrall recruited Wallace out of Georgia and said as soon as he signed that he anticipated he might play this season — and that was before an injury to Ole Miss transfer Jacquez Jones gave Wallace a chance to work with the first-team defense in practice last week. Wallace was the top-rated defensive player in UK’s 2021 signing class and 247Sports Composite Rankings rated him as the fourth-best defensive player ever to sign with UK.

“He’s not only a great player but he busts his butt to prepare and get ready,” Sumrall said. “He’s also really, really smart. He knows what he is doing.”

“I just ran track to help my football speed because if somebody is faster than you and you want to keep up with them you have to get faster,” Wallace said.

He also won the state powerlifting competition in his weight class with a power clean of 335 pounds.

His final game at Wayne County High School he had to start at quarterback and responded by rushing 28 times for 382 yards and one score. He also played every snap at linebacker.

“I never thought I would rush for that many yards or carry the ball that many times,” Wallace said. “I played quarterback but only threw the ball once. The team we were playing knew what was going to happen and still couldn’t stop it. I think about that game sometimes but that is in the past and I am focusing on the present.”

Wallace admits he had some “ups and downs” with high school coach Ken Cribb when he was a freshman and sophomore before starting to “click” his junior season when he only got to play four games due to injury.

“Our relationship started slow, but it got there. It ended up a great relationship and I figured out my senior year that I needed to study the playbook a lot more and that definitely is true here,” he said.

His mother and sister both have had huge impacts on his work ethic. His mother was manager at a McDonald’s in his hometown and he worked there part-time.

“I didn’t want to work but I had to learn how to manage money. If I was late or messed up, I heard about it when I came home. She would call me at 5 o’clock if I was supposed to be at work at 6. She was hard on me, but I learned you work for your stuff and don’t ask for nothing,” Wallace said.

His sister served in the military. She’s home now but “taught” him a lot of life lessons.

“As long as I had her and my mom, I didn’t have to worry,” he said. “They kept me straight and I doubt if that will ever change.” s

Kentucky has a lot of young defensive lineman that coordinator Brad White is counting on this year, but he also says senior Abule Abadi-Fitzgerald is going to be a “major factor” for UK.

“He is a massive individual,” said White. “He is starting to understand what we are asking of those guys.”

He played in 13 games as a redshirt sophomore in 2019 and played in five games last season.

He came to the United States from Nigeria and was always a basketball player until he tried football in high school. He had 39 tackles, nine tackles for loss, two sacks, 13 quarterback hurries, two forced fumbles, and one interception as a senior in high school.

“Early on it was very developmental for him (at UK),” White said. “The big thing for him is he just needs to continue to try and stay healthy. If he stays healthy, he is a guy who is going to be able to help us.”