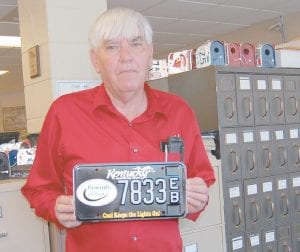 Letcher County motorists have been doing their part to make the “Friends of Coal” license plates the most popular specialty plate in Kentucky except for collegiate plates honoring the state’s universities.

The state has issued 50,000 of the “Friends Of Coal” plates in the past two and a half years. Of that number, 877 were sold to vehicle owners in Letcher County in 2011, said Letcher County Clerk Winston Meade. An additional 196 “Friends of Coal” plates were sold in the county between January 1 and March 20 of this year. Figures were not immediately available for the number of plates sold in 2010.

“Coal mining, as I’ve said many times before, is one of the cornerstones of Kentucky’s economy,” Beshear said during a Capitol press conference held March 14. “More than 19,000 people work directly at our mine sites with several times more than that number holding jobs indirectly related to the industry.”

Beshear has been one of the coal industry’s biggest cheerleaders, criticizing the U.S. Environmental Protection Agency for not approving new permits for mines in Kentucky.

“There’s no doubt that Kentucky coal keeps this state’s economy strong and also keeps this nation’s economy running,” he said.

Kentucky Coal Association President Bill Bissett praised Beshear and a group of more than 12 coalfield lawmakers who attended the press conference for supporting the coal industry.

Bissett said the industry has been pleased that so many people have shown support for the coal industry by choosing the black, specialty license plates.

In a rebuff to mountaintop mining critics, Stumbo said he lives on one such development that, besides houses, also has a golf course, riding stables, even a recreational ball park.

“To the people who say let’s save mountains: Go buy one,” Stumbo said. “There’s a bunch of them for sale. And if you own it, and you don’t want it mined, guess what, it’s not going to be mined that way.”