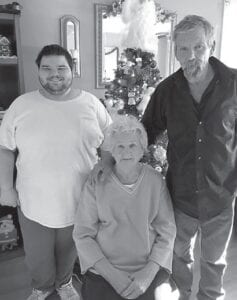 Shawn Paul Newman is pictured with his daddy, Paul Newman, and his grandmother, Louise Newman.

Anyway, I also got to see and talk with Iona Noble, another senior that I’ve gotten so close to through the senior program. It was also good to see Louise Murtaugh who works there. I love her attitude.

I also saw my second cousin, Richard Brown, and his wife Glenda, walking along the walking trail through Whitesburg. Some of the older pictures that my cousin gave me that belonged to Auntie Pearl, had some people in a few of them that we don’t recognize. I’m sure Richard or his dad, Glenn Brown, may be able to help us out on their identities. If we can find out who they are, I will post them in here. 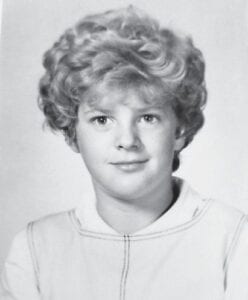 Oh yeah, I did get some goodies, too. By the time I got there, there weren’t many vendors or customers left, but everybody had on their masks and I felt very safe there. I found cabbage, peas, and beets. The Meltons, James and Leta, also gave me some elephant ear bulbs to plant in our flower gardens. I love this family so much. They have always been so friendly and good to me and Mommy.

If you haven’t voted yet and want to do it in person, all you have to do is go to the Letcher County Courthouse and the voting machines are in the room where the sheriff ’s office was, the first door on the right. I voted last week without any wait at all.

I have a list of birthdays that were all mentioned on Facebook this past week. Janet Ratliff, one of my sisters at Letcher Independent Baptist Church, had a birthday on the 9th. Brady Gross, Karigan Reese Mullins, and sister Lucille’s oldest grandson, Andrew Graves, all three celebrated their birthdays on the 11th. Kim Polly Arnold, Sharon Chandler, Earle Bone, Michelle Morgan and my first cousin, Lelah Adams Dixon, all had their birthdays on the 12th. Jesse Quillen, grandson of Maxine Quillen, turned 15 on the 14th. Shawn Paul Newman and also my brother in-law, Kenneth Dwight Holbrook, turned another year older on the 13th. I still don’t think he has grown up yet though. Bob Smith told Kenneth he hoped Delores fixed him a special meal for his birthday. The best thing Delores could do is not fix him something to eat. He evidently doesn’t know any of Delores’s cooking episodes. I’ll have to tell you about one of them.

Many years ago back when their kids were pretty young, they were having a visiting preacher at their church and since Kenneth was the preacher the visiting preacher stayed with them. (Some of these facts may not be true but they are the best I can remember). Somehow or another they found out he liked fried molasses and so Delores set out to see if she couldn’t make them. Her sister-in-law, Mary Holbrook Kilgore, told her how and so one morning she made them for him. They all had them in their plates and when they put their fork in the molasses they couldn’t pull their fork out of it. Delores was the last one to try and when she saw what was going on with the others, she said, “You all are just putting on.” But, when she put her fork in her molasses it wouldn’t pull out either. Well, they had a big laugh about it all and later when Delores threw them out to the dog, which had a habit of just catching food thrown at him in the air, he jumped up and caught the molasses and his teeth stuck tight together. Delores said it took him hours to use his paws to try to get that hardened molasses out of his teeth. After that whenever she would throw a biscuit or something else at him to eat, he would quickly turn his head and run. I think she found out later on there’s a time limit on how long you leave the molasses in the pan. Don’t know if she ever tried to fix them again, though.

Some prayer requests are Darrell Sturgill, Freedis Mullins Bailey, and the Baker family from Baker Recycling on Thornton. Their mother, Carrie Baker, passed away. Also, remember our pastor, Bill Jones, and his family.

Letcher Independent Baptist Church is still having Sunday morning services at the church building and also online. Wednesday night and Sunday night are both only on Facebook. If you have Internet available give it a listen. Lots of other church services are also still on Facebook.