From Bonnaroo and Lollapalooza fests back to Whitesburg for weeknight show 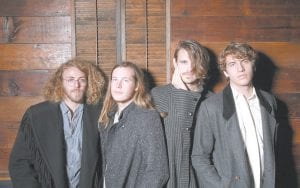 Utah-based Desert Noises has performed acclaimed shows at the Bonnaroo festival in Tennessee and Lollapalooza in Chicago since they last performed in Whitesburg. The quartet will take the stage at Summit City tonight (Wednesday). Admission is $12. Who are Desert Noises? They are an indie rock band that includes a member of the famous Osmond family. Here’s how the folks at Bonnaroo describe the band: “If you’re not a fan yet, frankly you should be, as these Utah natives are a uniquely refreshing force on the indie rock scene. The group draws from a myriad of older influences including the Grateful Dead, early Modest Mouse, and Bob Dylan. A consistent theme between all these influences is the timeless nature of their tunes; it’s this same classic sound that Desert Noises chases, and boy do they get close. If you didn’t know their debut album, 27 Ways, came out just last March, it would be hard to pinpoint a specific period in music. This is because rather than simply jumping on the latest trends in the music scene, Desert Noises has instead focused on creating simple yet lasting melodies and appropriate accompaniment.”