From Coal Mines to Rooftops: 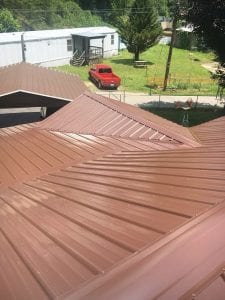 Brian McCown, owner of BMC Construction, was recognized recently in a top roofing trade magazine in a feature about peak performers in the roofing business.

BMC Construction was established in 2008. Mc- Cown and his crew, including a 30-year construction veteran and a newcomer, are also constructing post frame metal buildings.

Brian McCown and BMC Construction are established here locally in Letcher County for all your roofing needs or post frame metal buildings. You can also check us out on Facebook at Brian McCown Construction to see all of our work.

Anyone one in need of a new 40-year warranty metal roof or a post frame metal building are asked to give us a call. We are fully insured and offer free estimates. Call 606-335-1580.

According to former coal miner Brian McCown, there is an old saying about work opportunities in his area of eastern Kentucky: “the old saying is: coal mine, moonshine, or move on down the line,” he said. 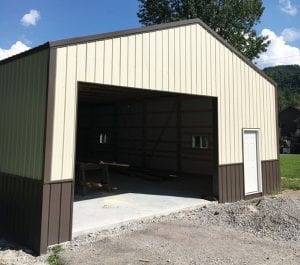 But McCown has added one of his own: metal roofing.

McCown’s operation, Brian McCown Construction, Eolia, Kentucky, is not huge: just himself and two employees. His work doesn’t include huge copper steeples or fancy architectural structures. It does include many challenges, however, and ample opportunities to make a living at what he enjoys in a hardscrabble area devastated by the decline of coal.

McCown tells his own story best.

“We all started out around the coal fields,” he said. “My dad worked his whole life in the coal mines and I just thought that was the direction I was supposed to go. I had about 11 years around coal mines.”

He worked four 12-hour shifts, followed by four days off. During his off hours he found other employment.

“I’ve always done something with my hands,” he said. “My dad was one of these guys who built everything we had. We didn’t buy much, we made it. He could build and do anything. He drove into me to be all I could be; get out and make it by yourself. When I was younger, I was mad at him because I wanted to play, but he drove into me how to make it.” 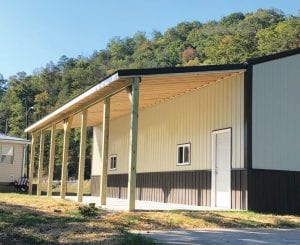 The type of part-time jobs McCown was picking up included home repair. People in his rural area recognized the value of metal panel, often using it for underpinning mobile homes. “We took a job one time on a place; we built some things, and while we were there [the owner] tried to talk us into doing a metal roof,” he recalled.

Inexperience was no excuse. “We got into it and it turned out OK,” he said. “We got it looking nice.

“Then we did another one or two [metal roofs] by word of mouth, and after we had done four or five of them we thought, well, maybe this is something to get into. We started making a few business cards and doing our homework.” 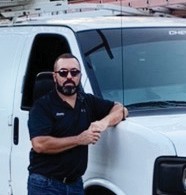 “At times I was doing better on my four days off doing this type of work than on the days at my regular job. I got so busy that I was working every single day,” he said.

McCown decided to go full-time into the roofing business in 2008. His decision coincided with the arrival of the Great Recession, but his options were limited. Times in the coal mines were getting tough. The country was being encouraged to move away from coal, and demand was diminishing.

McCown’s father, who worked up through the mines to be a supervisor, was nicknamed “Work Work” because of his commitment to his job. “When he took that management position it was like the mines were his. I remember as a kid, he would come home from his shift, eat a bite and turn right around and go back. He drove into me, if you want it, Son, you gotta work for it; go out and get it … I always looked up to him. He always said, you can be a little or you can be a lot, it’s up to you.”

As featured recently in

It was a struggle, he admitted. “I had to go through some hard times … In the beginning, I didn’t really get connected with anybody to help me, I didn’t have any work to show for it. I come in hoping I could make it, with no good way of showing I could make it.

“If you’d seen how I got started, gosh I was struggling. I bought this van, it was like a passenger van, and I just jerked the seats out the back of it and threw me a ladder rack on top of it, and I was trying to make it If you’d seen over the years how we advanced, and where we came from, as small as we area, and as poor as we started, I’m just proud of where I am today.

The hard times of getting established are behind him and the metal roofing business has never been better. “I’d say in the past 5 years we’ve been really, really busy; this year in particular has been a record-setting year. We are leaps and bounds ahead of where we were last year,” he reported.

A lot of McCown’s work involves re-roofing older homes. The challenges are often complicated by houses that started out small and grew in contorted roofing directions as families grew. They were originally roofed with asphalt that could bend and slash easily around the contortions, but didn’t last. “The weather we have is pretty tough on shingles sometimes and they just don’t hold up. They’ll develop issues and people will call us up and wonder what some options are,” McCown said. Metal has become a popular option.

McCown said about 75 percent of what he does is metal roofing, with an increasing number of new post-frame metal buildings on his list. His crew does everything from laying the concrete, to framing, to electrical and plumbing.

He is hoping to add more new buildings since they are quick to build and easier to roof than older, patched-together homes. Hobby shops are particularly popular with his car-collecting friends. “I’ve built six of those metal buildings so far this year and I have two more to build. I know that work don’t sound huge, but in a small little community where there’s not a lot of money rolling through, it’s huge for us,” he said.

McCown’s crew includes himself, plus a 30-year construction veteran, and a young newcomer, all with strong work ethics. There are times when McCown considers adding a second crew or at least another crew member to his three-man team. “We could stand another guy, but we’ve talked about it amongst ourselves and to find somebody that would fit into with what we’re looking for . . . we’re pretty particular and pretty much like family.”

He added: “I’ve got a crew right now that I think I could split into 10 directions and they’d be as good as anybody. Right now, it’s just us and we work like clockwork. We know what each other’s thinking. When we get out of the van in the morning, everybody’s got a job to do and you don’t have to say a word to nobody. All you have to do is head up the ladder and get busy. These guys are just down-to-earth country people who want to go out and make an honest living, go home, rest up and do it all over again.”

McCown finds it hard to turn anyone away, especially someone on a small-town budget with a leaky roof. He has been there himself and concedes that life can take some unexpected turns and he could land there again one day. At the same time, he doesn’t want to downgrade his materials, which in turn could downgrade his own business. “One question I get asked a lot, is do you have a #2 grade metal available, but the look just doesn’t hold up, so we try to get them the best quality of materials we can at a budget cost.” he said.

“Things like that keep us working,” he added, “Because people know that we’re not out there to just rake in every penny we can, but we are compassionate about what we do and have a heart for people who can’t do as they’d like to because of a health condition or the money they have.”

As McCown looks back on his journey, he is amazed at how far he’s traveled. It’s been a long, hard road and a rough hill to climb. “It’s really emotional to look back at the bottom of that hill and wonder how in the world did I climb it,” he said, “and I don’t think I could go back to the boy and get back up it, honestly, because of how dang tough it has been, and you wouldn’t believe how many (people) had tried it and failed. I feel so fortunate and thankful, you just don’t know!”