From digging coal to digging potatoes 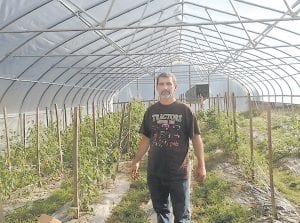 Shane Lucas, 40, wishes that more of his fellow coal miners would support the effort of the Community Farm Alliance and the Letcher County Farmers Market in Whitesburg.

Shane Lucas has found what he loves to do. Now he hopes to make a living at it.

When he was laid off from his coalmining job after 17 years and had to take a lower-paying highway construction job, he turned to farming his 29-acre piece of land to supplement his income.

Lucas, 40, lives in the Cowan area of Letcher County. He was recently called back to work at a mine in Harlan County. While he is glad for the money and knows he can’t turn it down, he had rather be raising a garden.

“If I could do anything in the world, this is what I’d be doing,” he said, gesturing toward his garden on a brilliant afternoon late last fall.

He is proud that he was able to supplement his income this year through his farming. He says he made more than $580 one Saturday morning at the Whitesburg Farmers Market. He sold approximately 1,600 pounds of tomatoes last season. If not for blight, it would have been at least 4,500 pounds, he believes. He also sold potatoes, onions, greens, kale, cabbage, corn and beans.

When asked what the other miners did to make ends meet after the massive layoffs that rocked the eastern Kentucky coalfields in 2013 and 2014, Lucas replied, “They left.”

Unwilling to join the outmigra- tion that took so many of his coworkers hundreds of miles away to find work, Lucas dug in his heels and kept planting crops.

“It’s a lot harder work than running a piece of equipment on a mine,” he said. “But I love it.”

He was disappointed, though, that he rarely saw coal miners at the Farmers Market buying the healthy food and supporting the local farmers.

“It bothered me,” he said. “They think we’re “tree huggers.”

He even dressed in his mining uniform when he rode through the Mountain Heritage Festival Parade in Whitesburg on a parade float with Grow Appalachia and Farmers Market volunteers. He says he did this to show miners and farmers they “don’t have to be against each other.”

For now, Lucas knows that he must accept the call to go back to the mines to support his wife and extended family that live with him on Lucas Farm.

However, he says he will miss spending so much time in his garden.

Perhaps this is because more than just economic stress pushed him to expand his small garden from a hobby into a business.

He was taught to raise a garden by his dad, Richard Lucas, who died in January 2014. Since his father’s death, he has put in many more hours than ever before in the garden.

“He’s out here with me,” Lucas said. He even bought back his dad’s first tractor, a grey 1948 Ford, from a neighbor who had purchased it from Lucas’s dad years ago. He found the right parts and has it running again.

Lucas has a five-year plan to try to make a living by farming. He has a small produce stand near his house that he wants to expand. He has considered getting his micro-processing license and Certified Market license to expand his offerings. He’s installed an efficient drip irrigation and fertilization system. He even plans to try growing 2,000 plugs of Shitake mushrooms this coming spring.

The Appalachian Food Story Project is an initiative of Community Farm Alliance to tell the story of how local food and farming in eastern Kentucky can contribute to a bright future in the mountains. For more on the project and the Alliance, visit cfaky.org.