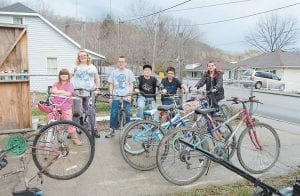 Mick Polly, of 48 5th Street, Whitesburg, has provided refurbished or new bicycles to 16 children. As he gets more donations he refurbishes more bicycles to be given to children who could use a bike. The children pictured above enjoy riding their bikes Polly gave them. Pictured from left are Madison Ackerman, Brea Franks, Brandon Martz, Kealan Lucas, Vincent Fleming and Clayton Martz. (Photos by Sally Barto)

When Mick Polly agreed to repair a bicycle for one boy in his neighborhood, he never thought he would end up providing bikes to 16 other children as well.

Polly, who lives at 48 5th Street in Whitesburg, said it all started about seven weeks ago when Brandon Martz, 13, who lives a few doors down from Polly, asked Polly to put a chain on his three-speed bicycle.

“A little boy down the street here had a flat tire,” said Polly, co-owner of XTreme Fun Inflatables. “He let someone pull his bicycle home on a motorcycle. It busted all the gears inside.”

Polly posted on the social networking site Facebook that he was looking for a back wheel for the bike. Scott Adams, former Whitesburg police chief, saw the Facebook post and dropped off two bicycles to Polly.

Polly was unable to repair Martz’s bicycle, but he was able to take the two bikes donated by Adams and fix a bike for Martz to ride around town.

“ Then I found out his little sister didn’t have a bike,” said Polly. 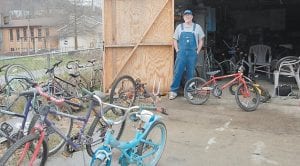 Eddie Caudill, of Whitesburg, donated nine brandnew bikes. In all, around 50 bicycles have been given to Polly.

“It’s awesome,” said Polly. “I had one fellow bring me a dozen about a week ago. We get them in constantly.”

Polly’s garage is full of different sizes of bicycles right now, but he said those will go fast.

Other people and groups including the Whitesburg VFW have donated new helmets and inner tubes. Workers at Bill’s Marathon have heated broken petals to loosen up tight bolts free of charge.

Polly uses all of the parts he can from bikes that are unusable, then takes the old metal frames to Baker’s Scrap Metal and Recycling at Thornton to get money to help buy helmets, inner tubes, foot pedals or whatever else is needed at the time.

Polly said about 90 percent of the bicycles he gives away are used or refurbished. He lets children pick out which bikes they want and ride the bikes until they find a good fit. So far, he has provided bicycles to 17 children, with nine more already promised they will get one soon. People have started calling Polly to tell him of children they know who could use a bike. As a result of those calls, a child in Burdine and one in McRoberts have received bikes and two children who live in Pike County will soon get bikes.

“ They’ll drive by, stop and ask if the bikes are for sale,” said Polly. “ None are for sale. No money required.”

Polly does require the children who receive the bikes to complete their homework and give their best effort in school.

“ The only thing I ask of the kids is if they have an ‘F’ on their report card to bring me a letter from their teacher saying they are doing better or are trying harder,” said Polly. “If you are trying harder, I can live with that.”

When six children got off a school bus near Polly’s home on March 14, Polly greeted them and asked who had homework. All of the children were respectful to him and told him what homework they had. These children ride their bicycles daily in the neighborhood. Some of the children help him wash and repair the bicycles.

Polly said he had never really worked on bicycles until recently, but said his new hobby is growing.

Polly said he hopes more people will donate bicycles, parts and helmets so he can continue to give more bicycles to children.

“The reason I continue to do this is to get them off of the couch, out from in front of the T.V. and away from texting for a little bit,” he said.

Polly said bicycles almost seemed to have become a thing of the past here.

“When I grew up that is what we did — ride the bikes around the neighborhood,” he said. “Now they don’t know their neighbors. I was surprised with how much they don’t get out of the house.”

Polly hopes to organize a bike rodeo in July to teach children proper hand signals and bike safety. He wants to give away helmets and hand guards as prizes.

“We can give them something to do during the summer to keep them out of trouble,” he said.

Polly said he attended a bike rodeo when he was a child in Naples, Fla., and thinks children here could benefit from a similar event.

The children who have already received bikes appreciate what Polly is doing.

“He’s a really nice guy,” said Brandon Martz. “He gives bikes away free to children who need them.”

Vincent Fleming said he would be bored and would have to walk more places if it wasn’t for Polly. The children often ride their bikes from East Whitesburg to the Letcher County Skate Park in West Whitesburg.

“I think it is a good thing what he is doing,” said Brea Franks, 13, Polly’s daughter. “They really do appreciate him.”

Franks said she has noticed that some of the boys have been paying more attention to their schoolwork.

“It keeps me grounded and keeps me in touch with the kids,” said Polly.