From the Apollo Theater in Harlem to Whitesburg: Brian Owens returns 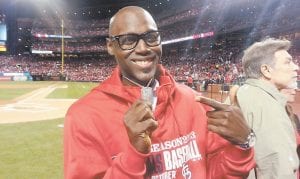 Last October, soul singer Brian Owens was performing the National Anthem before a sold-out crowd at Busch Stadium and an audience of millions watching Game Six of the National League Championship Series between St. Louis and Los Angeles.

Earlier this month, Owens amazed an audience at the famous Apollo Theater in New York City’s Harlem neighborhood with his version of Sam Cooke’s classic “A Change Is Gonna Come.” On April 11-12, Owens will return to New York City to appear as a special vocalist in the staging of jazz pianist and composer Dave Brubeck’s “The Real Ambassadors” at the renowned Lincoln Center for the Performing Arts.

This Saturday, Owens will return to Letcher County for his second soul music performance, this time with a full band with horns, at Summit City in Whitesburg. Admission to the 9 p.m. show is $15. There is no opening act.

Owens puts the same amount of effort — which is maximum — into all of his performances, whether they are in the area where he comes from ( St. Louis), in America’s largest city (New York), or in a small town before an audience of about 100 (Whitesburg).

“ For me, there has to be a greater purpose in my music than making a name for myself,” Owens told the online publication St. Louis Beacon recently.

Following is some of what St. Louis Beacon writer Terry Perkins had to say after a sit-down interview with Owens:

“Owens, born and raised in Belleville [Ill., near St. Louis], clearly has his musical career in perspective. For him, it’s a profession that has to find a balance with the other aspects of his life: his dedication to his wife, Amanda, and [four] children, and his commitment as a strong Christian who also has a strong sense of community.

“A soul singer, Owens’s love of music and his belief in its value to the community as well as his Christian commitment started at an early age. The youngest son of Thomas and Roberta Owens, Owens grew up singing at Centreville Church of Christ in Belleville with his older brothers. His father sang in a gospel group called the Soul Searchers; and by the time he reached high school, Brian had decided music was the path he wanted to follow.

“After graduation in 1998, Brian studied music for two years at Millikin University in Decatur, Ill., then decided to take a break from college and perform in a vocal group at Busch Gardens in Virginia.

“He was recruited to enlist in the Air Force in 2001 and used his vocal talents as part of the Air Force Band of Mid-America, based at Scott Air Force Base. Owens spent several years with the band as well as a smaller ensemble called the Starlifters, expanding the range of his musical interests. After his discharge, he enrolled at Southern Illinois University- Edwardsville, then transferred to the University of Missouri-St. Louis, where he completed his undergraduate degree in music. And he participated in the Air National Guard group, Sidewinder.

Last year, Owens put together and released the first recording of his “Masters Series,” an album of covers of songs by the late soul great Marvin Gaye.

“I also definitely want to do a concert featuring Ray Charles’s music. And Otis Redding of course, and Bill Withers and maybe Johnny Cash,” Owens told The Beacon.

“I have a broad idea of soul music,” Owens continued, “That it’s something that really has to do with our souls … .”