FROM THE MOUTH OF THE COUGAR 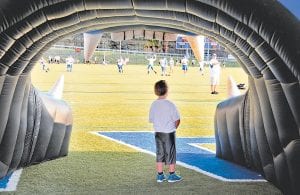 Six-year-old Paxton Hammonds stood at the mouth of Letcher County Central High School’s “Cougar Tunnel” admiring the 2013 team as they warmed up prior to last Friday night’s season-opening game against Berea. Paxton, a Martha Jane Potter student, said that when he gets older he wants to be one of the Cougars playing on the field pictured in front of him. (Photo by Chris Anderson)