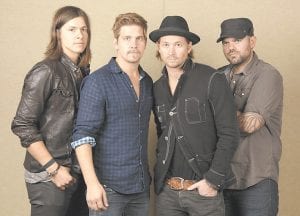 PERFORM IN LEXINGTON — Members of the band NeedToBreathe are, from left, Seth Bolt, Bo Rinehart, Bear Rinehart, and Joe Stillwell.

If you tuned into Jimmy Kimmel’s late night talk show on ABC on April 5 to catch Kimmel’s interview with University of Kentucky basketball standout Anthony Davis, chances are you watched NeedToBreathe perform their single “Drive All Night.” Less than a week later, the southern rock band from Possum Kingdom, South Carolina was on the UK campus in Lexington playing for a sold-out crowd of about 1,400 at the Singletary Center for The Arts.

NeedToBreathe opened the April 10 show with “Oohs and Aahs,” a track from their fourth album, “The Reckoning,” which was released Sept. 20 and reached number six on the Billboard 200 album chart.

An enormous old-fashioned typewriter, which spelled out “The Reckoning” on the round keys, lit up and flashed during a few songs as the band used stage lighting to dramatically enhance their performance.

During the middle of the concert, they performed a lively rendition of Johnny Cash’s “Folsom Prison Blues.” At one point in the show, lead singer Bear Rinehart used the word humbled to describe how he and the other three members of NeedToBreathe feel about the band’s success. Rinehart told the audience he and the rest of the band wouldn’t be around if they didn’t have fun and love what they do.

After a couple of girls in the crowd shouted “We love you,” Rinehart joked that you have to worry about someone who screams those words.

“It’s kind of like meeting a girl at Taco Bell,” said Rinehart. “It ain’t going to happen.”

NeedToBreathe ended the high-energy, two-hour show with an acoustic version of “Slumber,” the first single off of “The Reckoning,” and a song that reached number 26 on the Christian rock charts. Amazingly, the crowd was silent toward the end of the song while the band members stood at the front of the stage and belted out the lyrics.

NeedToBreathe has been traveling coast to coast the past three months as a tour headliner. Before that, the band spent five months as the opening act for Taylor Swift on her “Speak Now” tour, including an October stop at Rupp Arena in Lexington.

Bear Rinehart and his brother Bryant “Bo” Rinehart, both of whom are named after former University of Kentucky football coach Bear Bryant, formed NeedToBreathe in 2000. Bear Rinehart and drummer Joe Stillwell played music together at Furman University where Bear was a wide receiver on the football team. Bo Rinehart and bassist Seth Bolt attended Clemson University.

Even though Bear Rinehart, a son of a preacher, referred to the band at least twice during the Lexington show as a rock and roll band, NeedToBreathe songs can be heard quite frequently on K-LOVE, a comtemporary Christian music radio programming service that is carried locally on 99.7 FM.

NeedToBreathe will return to Kentucky on August 26 to open for The Band Perry at the Kentucky State Fair in Louisville.

NeedToBreathe’s opening act, Ben Rector, is worth checking out. Rector’s album “Something Like This” was released in September 2011 and reached the top of the iTunes Singer/Songwriter chart.

Rector is from Tulsa, Oklahoma, and plays the piano and sings pop-rock music.