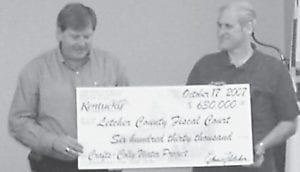 The Letcher County Fiscal Court has received a check for $630,000 to help pay for the construction of eight miles of water lines and meters at Craft’s Colly near Ermine.

The water lines will be maintained and operated by the Letcher County Water and Sewer District, which initiated the Craft’s Colly project in 2003.

The grant was presented to the court last week by Jay Whitehead, a state official acting on behalf of Environmental and Public Protection Cabinet Secretary Teresa J. Hill.

“These projects involve the construction of nearly eight miles of water main and the installation of meters to serve 228 residents whose water supply has been impacted by mining,” said Hill. “These extensions will replace tainted well water, giving citizens the assurance they will have safe water in their homes.”

A groundwater contamination study funded by the Division of Abandoned Mine Lands (AML) found that coal mining done before 1982 had impacted much of the groundwater in the Craft’s Colly watershed area.

The extremely poor quality of the water in Craft’s Colly helped persuade the Kentucky Public Service Commission to approve the formation in 1997 of the Letcher County Water and Sewer District, the local government entity in charge of planning for the basic water and sewer needs of county residents living outside the cities of Blackey, Fleming- Neon, Jenkins and Whitesburg.

The Water and Sewer District divided the Craft’s Colly project into two phases so that the portion of the project funding by Abandoned Mine Lands money and coal severance funds could be let for bids sooner. The check presented last week will help pay for the first phase.

Letcher County Judge/Executive Jim Ward said construction of the project, designed by Bell Engineering of Lexington, should begin within two to three weeks.

Ward said he hopes AML will revisit its study for the upper half of Crafts Colly so that the Water and Sewer District can proceed with obtaining the funds necessary to pay for the second phase of the project.