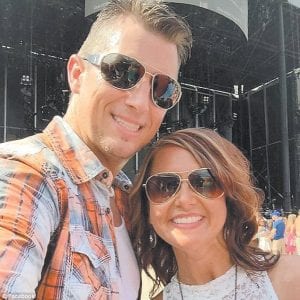 An online fundraiser has been started to help pay funeral expenses for double murder victim Crystal Warner, the northern Kentucky woman who, along with her boyfriend, Letcher County native Robert “Bobby” Jones, was killed in July after the couple went to check on property Jones owned in Washington County.

Bobby Jones’s sister, Becky Jones Isom of Letcher County, started the fundraising campaign on Go- FundMe.com after Warner’s body was found in Bath County. As of Tuesday night, $375 of the $5,000 goal had been met.

“Crystal Warner and her boyfriend, Bobby Jones, were taken on July 3, 2016 by their tenant and murderer,” Becky Isom wrote on GoFundMe on behalf of Warner’s parents, Mary and Bryan Reeve. “With search after search from friends and family, Crystal has been found within 30 minutes from where her boyfriend Bobby Jones was found. After moving a tree that had fallen, she was discovered and identified. Please help support her lovely mother and their family.”

Warner’s remains were found November 28 on a farm near the community of Owingsville, nearly four months after Jones’s body was found dumped off Interstate 64 near Winchester. The couple had last been seen together on July 3 at the Crases Branch home of Jones’s parents, the Rev. Bill and Sandy Jones. They had promised to let Mr. and Mrs. Jones know when they had returned to their northern Kentucky home after going to check on a rental house the 38-year-old Bobby Jones owned near the town of Springfield.

A 52-year-old Washington County man, Craig Pennington, is accused of murdering Jones and Warner after they arrived at the home to see if he had obeyed eviction orders. Both bodies were found just off I-64 exits, Jones at a Winchester exit and Warner at the Salt Lick exit. Investigators told WLWT-TV in Cincinnati that a skull found under a brush pile on private property by the operator of a bulldozer was found to be that of Warner. Some of her personal items were also found at the scene.

Becky Isom wrote on Go- FundMe.com that Mr. and Mrs. Reeve are having a hard time dealing with the loss of their 35-year-old daughter, whom Bobby Jones met after leaving Springfield to accept a job in a Toyota factory.

“So many things going through their mind and trying to maintain everyday life and work, we need to help financially with the expenses of the proper funeral Crystal deserves and will finally get,” Mrs. Isom wrote. “Please share and pray for this family and also the Jones family who loved and miss Crystal and Bobby so much. We will continue to fight for their justice!”

Speaking of her daughter and Mr. Jones in an interview with WLWT’s Dan Griffin, Mrs. Reeve said “it’s hard to let them go” even though she knows they are “in heaven.”

“I don’t know for me if in my heart anything will ever be closed because I’m always going to miss her every day and think of her,” Mrs. Reeve told Griffin.

Mrs. Reeve also believes the murders were premeditated, citing eviction documents she and her husband found that had been signed by Pennington all the way back in May.

“He just had it in his mind that he was going to go ahead and kill them. You know, it’s almost like it was premeditated. And I believe it was,” Mrs. Reeve told Griffin.

Bryan Reeve, who is Crystal’s stepfather, told WLWT that getting through the Christmas holiday without Crystal will be difficult.

“Crystal loved Christmas,” he told Griffin. “She would decorate two or three trees, decorate the house, you know, all these kind of things. It’s hard to know that you’ve got a loved one that’s going to be missing this year at Christmas.”

Pennington was arrested July 8 and charged with two counts of murder. Pennington, who has refused to cooperate with police, also faces charges of robbery, kidnapping, tampering with physical evidence, theft by unlawful taking, wanton endangerment, terroristic threatening, abuse of a corpse and menacing.

Funeral services for Bobby Jones, the father of three sons, were held in early August at the Letcher Independent Baptist Church, where his father preaches.