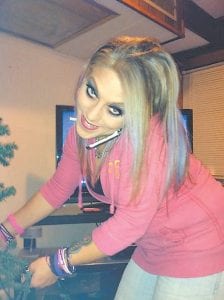 Funeral services were held Saturday for a Whitesburg woman who died after being hit by a car in Pike County last week.

Jessica Lea “Stumpy” Stambaugh Hall, 30, was pronounced dead at the scene on June 5 by Pike County Deputy Coroner Greg Hall. Kentucky State Police said Mrs. Hall was lying in a roadway on Lick Fork of Beefhide in the Dorton community of Pike County when she was hit by a vehicle around 4:30 a.m.

Authorities said a man called police and said that he was on his way to work when his vehicle struck an object. He said that when he exited the vehicle he found a female lying in the roadway.

The Pike County coroner told the Lexington Herald- Leader that several open alcohol containers were found on scene. The coroner thinks Mrs. Hall was lying unconscious in the road before being hit.

Funeral services for Mrs. Hall were held June 8 at the Haymond Freewill Baptist Church. Burial was in Green Acres Cemetery at Ermine.

Everidge Funeral Home of Whitesburg had charge of the arrangements.