Funeral held Tuesday for drowning victim, 60, who drove into a pond 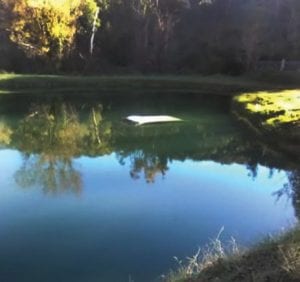 The top of the victim’s vehicle can be seen in this photo taken at the scene of the apparent accident.

Funeral services were held Tuesday for a Letcher County man found dead in a neighbor’s pond after an apparent car accident Friday.

Kentucky State Police Post 13 in Hazard received a call at 1:40 p.m. from a man reporting that he had discovered his neighbor in the pond on Cornett Branch Road at Linefork.

A preliminary investigation indicated that Darrell Eugene Maggard, 60, of Linefork, drove his vehicle into the pond sometime during the previous night. Letcher County Coroner Renee Campbell said the van Maggard was driving was submerged in the pond, but the top was still visible. His body was found outside of the vehicle in the water. Campbell pronounced Darrell Maggard dead at the scene at 4:24 p.m.

While there is a continuing investigation, no foul play is suspected at this time.

The body was sent to the State Medical Examiner’s office in Frankfort for an autopsy, and toxicology results are pending. Detective Brandon Thomas with KSP Post 13 is leading the investigation.

Maggard was a son of the late James and Lois Hall Maggard.

Funeral services were held October 23 at Letcher Funeral Home. Burial was in the Hall Cemetery at Ermine.