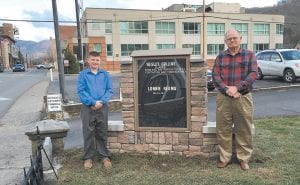 Robbie Campbell, owner of Letcher Funeral Home, and his grandson, Noah Campbell posed for a photograph with the new stone obituary board at the funeral home.

Even though the two funeral homes in downtown Whitesburg provide obituary information on their websites as well as in The Mountain Eagle and on the radio, Letcher County residents still want to see names of the deceased and arrangement details on the marquees located on the funeral home lawns.

The late Ray Collins, who previously owned Everidge and Hatton Funeral Home under the name Ray Collins Funeral Home, is credited with being the first to erect a sign on the funeral home lawn in the mid 1970s as a way of letting people know who died and when visitation and funeral services will be held.

“So many people wanted to know (who died) but didn’t have a phone,” said Charles Day, who worked for Collins and other owners of what is now Everidge and Hatton Funeral Home. “They’d just drive by (the funeral home) and wouldn’t have to bother to call.” 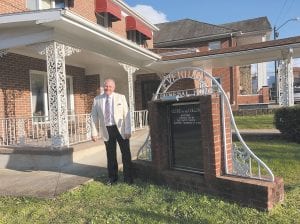 Larry Everidge, of Everidge and Hatton Funeral Home, stands next to the funeral home’s obituary board in downtown Whitesburg.

“I can’t think of any other place that does it,” said Robbie Campbell, owner of Letcher Funeral Home. “It’s very rare. This is what you call old fashioned.”

Campbell said the obituary boards provide a good service to the community.

Funeral services and burials are sometimes completed a couple of days after someone dies. The newspaper hasn’t come out yet.

“There are times that a neighbor dies and you won’t know it happened unless you see the name on the board,” said Campbell.

It is common for people to drive by the boards upon returning from an out-oftown trip. Some motorists circle around Main Street and Webb Avenue a couple of times in order to read everything on the obituary boards. Others stop their cars right in front of the boards. Campbell said motorists reading the boards have resulted in 10 or 12 fender benders since 1983.

Campbell said he has gotten a few telephone calls from people who have driven by the funeral home after seeing a name on the board that is the same name as the caller. He tells the caller, “Well, it’s not you.”

“It freaks them out a little bit,” he said.

Campbell said people call the funeral home wanting to know more about the person whose name is on the board to see if they knew them.

In the mid 1980s, owners of the two funeral homes discussed getting rid of the marquees.

“People would say ‘You better not take that board down,’” Campbell said, who recently had a new board installed with stone posts. “We made it permanent. As long as I’m here, it will be here.”

Larr y Everidge, o f Everidge and Hatton Funeral Home, doesn’t have plans to remove the board at 65 Main Street. A few years back a tractor-trailer demolished the obituary board. Before a new sign could be installed, people called the funeral home to find out who died.

After the new sign was completed, a mother whose child died while there was no obituary board outside asked Everidge to put her child’s name on the board.

“It meant that much,” said Everidge. “(The board) will always be there until the end of time.”

Chances are if you live in Letcher County, when asked how someone is doing, you have heard the reply, “Well, my name isn’t on the board.”