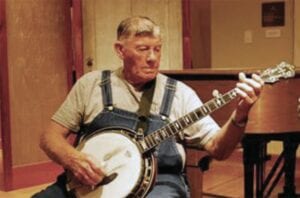 Lee Sexton, a master banjo picker who was featured on a Smithsonian Folkways album and at local square dances and who made a cameo appearance in the motion picture Coal Miner’s Daughter, died February 10 at Mary Breckinridge Hospital in Hyden. He was 92.

Known as Lee Boy to his many friends and acquaintances, Sexton began playing banjo at age 7, learning from his father and uncles, and was known as a master of the two-finger and clawhammer styles, the traditional eastern Kentucky banjo methods. Over an 85- year career, he continued to play at community festivals and weekend square dances in Letcher County while recording music for the Smithsonian Institution in Washington, D.C., and appearing in workshops, concerts, documentaries and at the Kentucky Derby. In 1999, Gov. Paul Patton gave him the Governor’s Award in the Arts.

Sexton was born in 1927, the middle of three children born to the late Emmitt and Vina Campbell Sexton of Linefork. Though his love was music, he worked in the coal mines during the week and played music on the weekends. His right hand was crushed in the mines when he was just 23 years old, forcing him to develop his own style of clawhammer picking.

Sexton was preceded in death by his parents; a brother, James; a son, Philip; and his first wife, Genevia. He is survived by his wife of 48 years, Opal; a sister, Othelle Caudill; a son, Johnny (Debbie) Sexton; grandsons, Damon (Samantha), Landon, Sexton, Andrew Sexton, Leyton Sexton, Kingley Sexton, Chance Brewer and Kade Brewer; and granddaughters, Kim Brewer and Stacey Sexton.

Funeral services were held at 1 p.m., February 14, at Letcher Funeral Home with Damon Sexton officiating. Burial was at the Press Whitaker Cemetery.