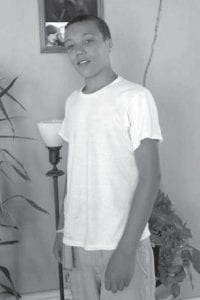 Funeral services will be held Thursday for a 15-year-old boy who died at his grandparents’ home Saturday morning.

Isaiah M. Nixon, a student at Jenkins Middle-High School, was found unresponsive about 10 a.m. Saturday at his grandparents’ home at Wright’s Hollow Circle.

Letcher County Coroner Marty Baker said the preliminary cause of death is undetermined. The body was taken to the State Medical Examiner’s Office in Frankfort for an autopsy. Results aren’t expected back for at least two weeks.

Isaiah was preceded in death by a stepsister, Jessica Hall; his greatgrandmother, Hazel Lawson; his stepfather, Warren Stambaugh; and an uncle, Calvin Bates.

The funeral will begin at 1 p.m. on August 8 at Dunham Freewill Baptist Church. Burial will follow at Green Acres Memorial Park in Ermine.