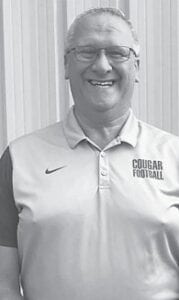 Born in Louisville, he was the son of Glenna Stewart Smith of Whitesburg.

Mr. Harris was a member and deacon of the First Baptist Church in Whitesburg. He was a former Letcher County School Board member. He worked for Pepsi from 1981 until 2019 when he retired. He went on to work for Childers Oil from 2019 until the time of his death.

He enjoyed being outdoors, especially hunting and fishing. He took tremendous pride in his family, devoting all of his time to his children and grandchildren.

Surviving in addition to his mother are his wife, Glenna Jean Cornett Harris; a son, Cory Harris and wife Kelsey of Mayking; a daughter, Leah Craft and husband Brandon of Oak Ridge, Tenn.; two sisters, Sheree Combs and husband Don of Paris, and Robin Jolly and Barry of Jeremiah; and three grandchildren, Carson and Kinslee Harris and Sadie Craft.