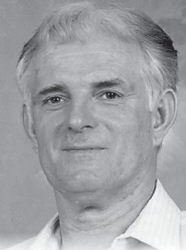 Jack Lucas, 66, died January 25 at his home in Henrietta Township, Ohio, after a long illness.

Born at Democrat, he was a son of the late Emil and Ethel Martin Lucas, and a brother of the late Charles Ray Lucas and Larry Wayne Lucas.

Lucas worked at the Lorain Plant of the Ford Motor Corp. for more than 27 years, retiring in 1999. He was a member of the United Auto Workers Union #425 in Lorain and attended Cross Roads Baptist Church in Oberlin

Survivors include his wife of 44 years, Doris Hall Lucas; his daughters, Karen Lucas and fiancé Lee O’Bryon of Vermilion, Ohio, and Michelle Swing and husband Jeff of Salisbury, N.C.; grandchildren, Natasha, Marissa, Kayleigh, Jake, and Sydney; two brothers, Bill Lucas and his wife Sandy, and Darrell Lucas, all of Thornton; and four sisters, Shirley Lucas and Sylvia Reynolds and husband Stuart, all of Whitesburg; Sharon Aderholt and husband Frank of Cullman, Ala.; and Judy Holbrook and husband Terry of Thornton.