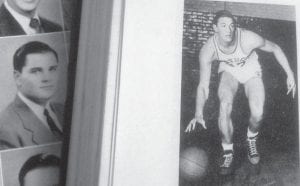 This photo shows Wallace Clayton “Wah-Wah” Jones as he appeared in photos in The Kentuckian, the University of Kentucky yearbook. Late Mountain Eagle editor and publisher Tom Gish was the editor of The Kentuckian in 1947 and wrote of Jones, then a six-foot, four-inch sophomore forward and center: “The Harlan Hurricane was the fifth highest scorer on the cage team with 217 points in 33 games. He was the ‘man of the hour’ in both post-season tournaments, scoring 50 markers in the SEC tourney and was again UK’s individual high scorer in the N.I.T. in New York with 36 tallies. Wallace Jones, like [sophomore teammate Ralph] Beard, has made the All-SEC quintet in his first and second years with the Ruppmen. Wah-Wah has scored 507 markers in his two seasons. He made All-American at forward this spring.”

Funeral services will be held in Lexington Friday for Wallace “Wah-Wah” Jones, a multi-sport star who helped Kentucky win the first two of its eight national titles and is considered the school’s greatest all-around athlete, has died. He was 88.

Jones, an All-American, was the last surviving member of the Wildcats’ “Fabulous Five” that won the 1948 national championship and went on to claim Olympic gold that year with the U.S. team. He returned with three teammates under Hall of Fame coach Adolph Rupp to repeat as titlists in 1949.

That wasn’t Jones’s only talent.

Jones played football from 1945-48, including three seasons for legendary coach Paul “Bear” Bryant, and earned all-Southeastern Conference honors in 1946 and ‘48. Tall and chiseled, he also played baseball for the Wildcats.

Jones is the only Wildcat to have his jerseys retired in basketball and football.

Anderson, Laws and Jones funeral home in Harlan confirmed that Jones died Sunday. His funeral will be Friday at 1 p.m. at Immanuel Baptist Church in Lexington.

Kentucky coach John Calipari was among many posting condolences on Twitter, saying, “Sad to hear of the passing of arguably the greatest UK athlete, Wah-Wah Jones. He was an All-American under Adolph Rupp and Bear Bryant. … please join me in praying for both his family and friends. He will be missed.”

As good as the Harlan native was in football, he is best remembered for basketball skills that helped Kentucky begin its run of championships in the late 1940s.

Two years after the 6-foot-4 Jones teamed with Ralph Beard to lead the Wildcats to the 1946 NIT championship — then considered equal in stature to an NCAA title — those two joined Alex Groza, Kenny Rollins and Cliff Barker to form the so-called “Fabulous Five” that went 36-3 and beat Baylor 58-42 for Kentucky’s first national title. The entire starting quintet was named to the U.S. Olympic team that routed France 64-21 for the gold medal in London.

All but Rollins returned the next season as Kentucky beat Oklahoma A&M 46-36 behind Groza’s 25 points to repeat as champions. Jones, Beard and Groza were named All-Americans that year.

Jerseys of the Fabulous Five, including Jones’s No. 27, were retired by the school. In 2012, he was part of the inaugural class inducted into the Kentucky High School Basketball Hall of Fame.