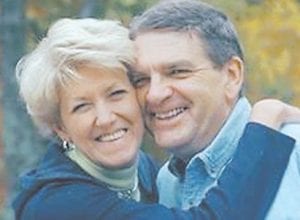 Williams, right, retired recently, in part to spend more time with his family, including his wife Earlene.

Funeral services for a longtime x-ray technician and popular member of the Whitesburg City Council will be held at 1 p.m. today (Wednesday) at the First Baptist Church in Whitesburg.

John Paul Williams, 70, was pronounced dead Sunday evening at the Whitesburg Appalachian Regional Healthcare hospital, where he was taken after suffering a massive heart attack,

Williams had served on the Whitesburg City Council since June 21, 2001. He also served on the City’s police commission for the past six years.

“John was one of the finest men I ever knew,” said Whitesburg Mayor James W. Craft. “He loved God. He loved family. He loved church. Then he loved the City. He worked tirelessly for all of those.”

For 20 years, Williams was the chaplain and a member of the Whitesburg Volunteer Fire Department.

“He would take it upon himself to make sure he knew what to do so nobody else would have to worry about it,” said John Swisher, a member of the Whitesburg fire department. “He would say the prayers. Bless the meals.”

Williams was a member of the First Baptist Church of Whitesburg where he served as a deacon and a Sunday school teacher for the youth department.

He was also a Shriner and a member of the Whitesburg Masonic Lodge # 754.

“ He was one of those guys that you just couldn’t be mad at or say anything bad about,” said Swisher. “He always kept us in line with his two favorite words — now guys. Everybody would quiet down. Then we knew to listen.”

Arthur “Ozz” Jackson, who had been friends with Williams for about 50 years, described Williams as an honest man who helped others.

“ He was a man of his word,” said Jackson. “If he told you something, that is the way it was. If you were down, he’d be there for you.”

Craft said Williams was a servant.

“Anytime the City had a function, you could always count on John being the first one there and the last one to leave,” said Craft.

About 10 months ago Williams retired from Mountain Comprehensive Health Corporation’s Whitesburg Medical Clinic, where he was employed as the department of radiology supervisor. Prior to working at MCHC for about 20 years, William worked in the radiology department at the Whitesburg hospital.

“We were very fortunate to have him as an employee,” said Rebecca Amburgey, clinic administrator at Whitesburg MCHC. “I can’t say enough good things about him because I can’t think of anything bad. He was just so upbeat and ready to take on the world.”

A son of the late Grover and Pauline Suznick Williams, Williams was born in Perry County on May 20, 1943.

He is survived by his wife Earlene Williams of Whitesburg; two daughters, Wendy Little and husband Claude of Whitesburg, and Nikki Bowling and husband Marcus of Madisonville; a sister, Edith Atcher of Lexington; and five grandchildren, Luke, Jake, Sam, Jonah, and Josie.

“He will be missed in the community,” said Amburgey.