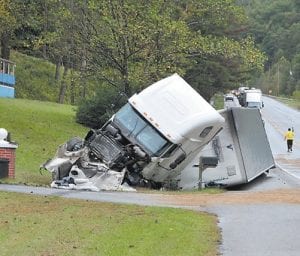 The tractor-trailer ended up on its side after a fatal accident that left KY 15 closed for several hours last Thursday.

Funeral services have been held for a Whitaker man and his nephew, who were both killed in a wreck at Dry Fork last week.

Joseph Neil Caudill, 26, of 64 Wright’s Hollow, Jenkins, and Bobby Lee Jent, 43, of 54 Windstar Drive, Whitaker, were killed October 1 after the 2000 Chevrolet pickup truck being driven by Caudill went out of control and hit a 2006 Freightliner tractor-trailer driven by a woman headed to Tennessee.

Kentucky State Police Det. Randy Combs said the pickup was headed north on KY 15 about 11:50 a.m. on October 1 when it crossed the centerline and into the pathway of the 18-wheeler being driven by Jody Townsend, 41, of South Carolina.

The wreck occurred near KY 15’s intersection with Loggy Hollow, near the former location of Tolliver’s Bargain Homes.

The preliminary investigation indicates that wet roads may have been a factor. Combs isn’t sure if the pickup hydroplaned, but said that the pickup went out of control.

Caudill and Jent were pronounced dead at the scene at 12:35 p.m. by Letcher County Coroner Perry Fowler, who said the two suffered severe head and body trauma. The two men weren’t wearing seat belts at the time of the wreck, said state police.

Fowler said the wreck was “one of the worst wrecks I have ever worked,” adding that the pickup was damaged almost beyond recognition. The force of the collision caused the bed of the pickup to separate from its cab. Both the trailer and tractor of the 18-wheeler overturned on the road’s shoulder.

Townsend, who was wearing her seat belt at the time of the collision, was transported to the Whitesburg hospital, where she was treated for minor injuries.

The wreck remains under investigation by Combs.