Funerals to be held here for 2 killed in Louisville 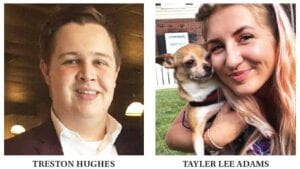 Funeral services will be held Thursday at the Little Colley Pentecostal Church for Tayler Lee Adams, who was one of two young Letcher Countians killed in a car crash Sunday in Louisville.

Adams, 21, of Isom and Treston Hughes, formerly of Letcher County, died at the scene of the collision at the intersection of Breckinridge Lane and Taylorsville Road in Louisville.

WAVE 3 News is reporting that the car with Adams and Hughes in it was passing through the intersection about 6:15 a.m. Sunday when another car ran a red light and struck their vehicle in the side. Both Adams and Hughes were pronounced dead at the scene. The woman driving the other vehicle was taken to a hospital with life-threatening injuries.

Funeral arrangements for Hughes remained incomplete Tuesday night. He is a 2017 graduate of Letcher County Central High School. Letcher Funeral home has charge of funerals for both Adams and Hughes.

Tayler Adams was a daughter of Gina Vonda Adams-Wright of Isom and the late Herbert Jackson Adams.

She was a 2019 graduate of the University of Louisville with a Bachelor’s Degree in Clinical Psychology.

Surviving in addition to her mother are three brothers: Donnie Adams and wife Amanda of South Carolina, Herbert Joshua Adams and wife Amanda of West Virginia, and Zane Adams, at home; a sister, Angel Adams of Cowan; two stepbrothers, Cody Wright and Waylon Wright, both of Camp Verdie, Ariz.; her stepfather, Brian Wright; her maternal grandparents, Ellis Sturgill and Dorla Sturgill of Dry Fork; and a number of nieces, nephews, and other relatives and friends.

She was preceded in death by her paternal grandparents, Ray and Jenny Adams. Funeral services will be held at noon on Thursday, June 4, at the Little Colley Pentecostal Church with Bennie Pugh and Caleb Howard officiating. Visitation will be from 6 to 11 p.m. tonight (Wednesday) at the church. Burial will follow in the Adams Cemetery at Whitesburg.