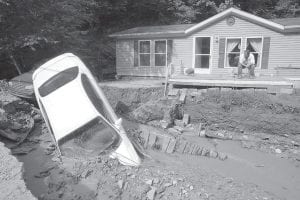 Carl Mills of Red Jacket, W.Va., sat on his front porch behind his two automobiles that were washed into a small creek flowing in front of his house when flash flooding hit his community on May 8. (AP Photo)

At least one funnel cloud was spotted over Letcher County on May 8 as heavy spring storms swept through the area and brought with them the rare issuance of tornado warnings here.

The National Weather Service in Jackson received one public report of a funnel cloud at Deane at 8:30 p.m. on May 8, said Dave Harbage, a NWS senior forecaster.” Letcher County escaped the storms pretty good,” said Paul Miles, director of Letcher County Emergency Management. “We did have some damage with trees down and roads blocked.” Deputy Letcher Judge/Executive Eddie Meade said the hardest hit areas in the county were Jackhorn, Haymond, Isom, McRoberts, upper Rockhouse and Millstone.

“We did have a few reports of trees blocking roads or on cars,” said Meade.

“I watched the storm come in and it was pretty nasty,” said Stephens.

Sarah George, information office with the Kentucky Transportation Department District 12 in Pikeville, said no roads had to be closed in the county, but KY 7 North and South, KY 805, KY 317, KY 931 and KY 113 all have trees and debris which had to be moved to the shoulders and will be removed as soon as crews can get to them.

“Other counties had wind damage plus flooding and are still trying to recover,” said Miles. “We were very lucky.”

“We had some power outages for a while but nothing real bad,” said Stephens.

“When you lose everything, it’s hard to understand. I’ve seen it on the news and on the TV, people losing everything,” said 30-yearold Chris Holbrook, of Martin. “It’s really never set in. Now I understand what it’s like.”

Holbrook said he and his mother lost nearly everything they owned, except for a guitar and a bag of clothes. His beds, couches and other household essentials sat in front of his house — damaged. For now, he’s staying with friends.

He’s one of many local residents affected by weekend flooding in eastern Kentucky.

Severe storms hit both Kentucky and West Virginia on Friday, and a powerful tornado cut through an area near Richmond, Ky., killing two people. A third person was killed in Franklin, Ky. after his vehicle was swept away in a flash flood.

The storm caused damage in 15 counties and four cities, including about 1,700 homes in Pike County. State officials said about 2,000 people were left without water in four eastern Kentucky counties: Floyd, Pike, Breathitt and Knott counties.

On Tuesday, hundreds were seeking free meals at shelters set up throughout the region, while a few needed overnight refuge. Two elementary schools in Pike County were possibly going to be closed for the rest of the school year because damage from flooding and mudslides, Judge/Executive Wayne Rutherford said.

In Martin, a town with a population of about 640 people, a group of volunteers was trying to salvage what was left of the Martin House of Worship. Floodwater ruined the floors, walls and insulation, along with furniture and other items belonging to the congregation of about 40 people.

Lora Noble, a 39-year-old emergency room employee, said she and a few other church members waded through waist-high water to save guitars, drums and electronic equipment.

“We need help,” Noble said. “God will answer our prayers. We’ll be back.”

Brig. Gen. John Heltzel, the head of Kentucky’s Division of Emergency Management, said he expected the state to qualify for federal assistance, which could also lead to individual help for people who qualify.

Beshear vowed the state would keep working to help people with the recovery.