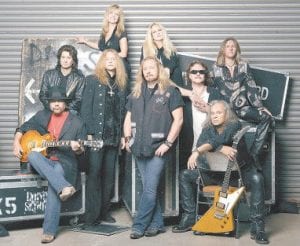 The future of Lynyrd Skynyrd remained uncertain after the funeral of keyboard player Billy Powell, who died last week of an apparent heart attack.

Powell, who played keyboards on such hits as “Sweet Home Alabama” in 1974 and whose work later appeared on Kid Rock’s smash of 2008, “All Summer Long,” was pronounced dead at 1:52 a.m. on Jan. 28, less than an hour after he called 911 complaining of chest pains and shortness of breath. Powell, 56, had a history of heart problems and had missed an appointment with a cardiologist on Jan. 27.

Lynyrd Skynyrd was formed in Jacksonville in 1966 by a group of high school students. Famously, it took its name from a physical education teacher they disliked, Leonard Skinner. Powell joined the group in 1970 and became its keyboardist in 1972, the year before they released their first album, “Pronounced leh-nerd skinnerd.”

It became one of the South’s most popular rock groups, and gained national fame with such hits as “Free Bird,” ”What’s Your Name” and especially “Sweet Home Alabama,” which reached the top 10 on the charts in 1974. The band was inducted into the Rock and Roll Hall of Fame in 2006.

The band was decimated on Oct. 20, 1977, when their chartered plane crashed in a swamp near McComb, Miss.

Powell received facial injuries in the crash, but eventually recovered. He was the only band member well enough to attend the funerals of those killed in the crash.

Two years after the accident, Powell and fellow members Allen Collins, Gary Rossington and Leon Wilkeson formed the Rossington- Collins Band. It broke up in 1982.

In 1987 Johnny Van Zant — Ronnie’s brother — and a new Lynyrd Skynyrd Band went on a tribute tour, and Powell was on hand again in 1991 when the revived version of the band put out a new album, “Lynyrd Skynyrd 1991” and started a tour in Baton Rouge, La., where the band was headed in 1977 when the plane crashed.

One of Powell’s last public performances came on New Year’s Eve when he and other members of the new Lynyrd Skynyrd performed at the Eastern Kentucky Expo Center in Pikeville.

Johnny Van Zant was devastated by Powell’s death. Hearkening back to the deaths of other members of the band, he said: “Maybe it is just the destiny of Lynyrd Skynyrd. We’ve played before millions and millions of people and it’s been a wonderful ride and a bumpy one too.”

Van Zant said Powell had been a roadie for the band when his brother heard him playing piano during a rehearsal of “Free Bird.”

“Nobody knew he could play the keyboard,” Van Zant said.

“That focus on the guitar is what made the Allman Brothers the Allman Brothers,” Harrison told Jacksonville television stations WTLV and WJXX. “But how Lynyrd Skynyrd was unique was that driving force that Powell provided with the keyboard lines, especially in ‘Sweet Home Alabama.'”

Harrison said the appearance of Powell’s work on Kid Rock’s “All Summer Long” is measuring stick of Powell’s influence.

“The fact that Lynyrd Skynyrd’s song from 30 years ago has been used in a different way by a modern recording artist shows volumes on the impact he had on music even today,” Harrison said.

The band had recorded several songs for a new album and had upcoming gigs, which have been canceled, Van Zant said.

Howard Kramer, curatorial director at the Rock and Roll Hall, said Powell “was a phenomenal piano player. The band may be able to get another piano player, but they will never replace Billy Powell.”

“He was one of the best piano keyboardists, rock ‘n’ roll keyboardists, of our lifetime,” said Ross Schilling, the band’s manager.

Powell’s death leaves guitarist Rossington as the only member of Lynyrd Skynyrd’s current lineup who appeared on the band’s 1973 debut.

The Florida Times-Union of Jacksonville reported that group co-manager Larkin Collins, father of original guitarist Allen Collins, said those involved with the band will meet and “collectively” decide what might happen next.

Allen Collins, who had been paralyzed in a car crash, died of pneumonia in 1990. Larkin Collins has control of the Lynyrd Skynyrd name along with Rossington and Judy Van Zant Jenness, widow of Ronnie Van Zant. He said he expects a decision in three or four weeks.

“I can’t say it’s over,” Larkin Collins said. “It depends on Gary. As far as I’m concerned, if Gary wants to stay out on that stage, then we’ll try to help him.”

Union the band got back together in 1987 with an agreement that it could be named Lynyrd Skynyrd if three original band members were in the lineup.

After the death of bassist Leon Wilkeson in 2001, that requirement was lowered to two. Collins said it’s possible the agreement could be changed to let Rossington carry on as the only original member.

“Without an original band member, I’ve got my doubts,” he said. “We’re not going to turn it loose to nobody who would ruin the name, let it get out there and have no respect for the name.”

Powell was married to Ellen Vera Powell for 22 years. The couple had four children.

An obituary the family published in the Times-Union opened with the following lines: “In the early morning hours of Wednesday, January 28, Tuesday had gone with the wind, and with it took legendary Lynyrd Skynyrd pianist William ‘Billy’ Norris Powell.”