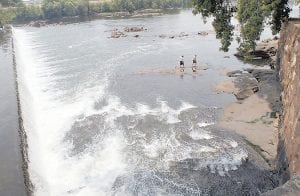 Men walked on the rocks in the Chattahoochee River below the City Mills dam near Columbus, Ga., in this June photo. (AP Photo/The Ledger-Enquirer, Robin Trimarch)

A river with a history of ferry boats and Civil War battles may one day provide a new route for hikers who finish the Appalachian Trail to continue south until they reach the Gulf of Mexico, a national conservation group says.

Leaders envision the Chattahoochee River as a way to allow Appalachian Trail hikers to reach the Gulf either on trails along its banks or in a canoe or kayak on the river. The trail already stretches from Maine to north Georgia.

The Chattahoochee’s headwaters, in the north Georgia mountains, are near the trail’s southernmost section.

“The idea is that someone looking for adventure could hike the Appalachian Trail, and then get off the trail and go to the headwaters of the Chattahoochee,” said Curt Soper, the Georgia Alabama state director of the Trust for Public Land. The nonprofit has worked for years to acquire land in the area and make it available to its partners, such as the National Park Service. The new route could become a reality within the next decade, Soper said.

The trust has already acquired and set aside 17,000 acres of land that touch 76 river miles from the Chattahoochee’s headwaters to Columbus, Soper said.

The trust is also working on a project known as the Chattahoochee Valley Blueway, which involves 52 miles of the river from the city of West Point to Columbus, southwest of Atlanta near the Alabama line. The aim of that project, expected to be completed in the next three years, is to create a so-called “canoe trail,” a well-marked waterway with several places to launch canoes and kayaks, Soper said.

In metro Atlanta, there are already more than 70 miles of hiking trails along or near the river within the Chattahoochee River National Recreation Area, created in 1978 by former President Jimmy Carter.

Soper and others believe there’s great interest in such projects.

“The idea of a way to walk from Maine to the Gulf of Mexico is a wonderful idea that I think would generate a lot of interest and passion and would be wonderful if some way, somehow we could make that work,” said Patricia Barmeyer, an Atlanta lawyer who serves on the Georgia advisory council of the Trust for Public Land.

One of the most recent land transactions was announced last year in Johns Creek, where names like McGinnis Ferry Road harken to the days when ferries used to carry residents and goods across the river. At a small ceremony near the historic Rogers Bridge over the river, city leaders joined Trust for Public Land officials to announce the donation of 22 acres of land to expand the Chattahoochee River National Recreation Area.

The area is rich in history. The site was once a meeting ground between the rival Cherokee and Creek Indians, whose nations were separated by the Chattahoochee, according to historical documents from the city of Johns Creek. The tribes considered the area a sacred place and held peace talks there.

The Chattahoochee also played a key role in the U.S. Civil War, when Confederate gunboats patrolled the river and soldiers built forts along the water to try and stop Union forces from reaching Atlanta.

In the north Georgia mountain town of Helen, some businesses offer shuttle services to bring hikers from the Appalachian Trail into town, said Jerry Brown, executive director of the Alpine Helen/White County Convention and Visitor’s Bureau. Hikers frequently use the post office in Helen to get packages or supplies or mail items they no longer need back home, he said.

The idea that hikers on the Appalachian Trail would be able to continue their journey on the Chattahoochee or its banks is an appealing one because the river runs through the town, Brown said.

South of Columbus, the Chattahoochee forms the Georgia-Alabama state line.

A hiking trail could be on either side of the river, which would offer some flexibility in creating it, said Tony Aeck, an architect who serves on the Trust for Public Land’s Georgia advisory council.

After the Chattahoochee crosses the Georgia-Florida line, it becomes the Apalachicola River and flows across Florida’s panhandle, entering the Gulf of Mexico at Apalachicola Bay.

“It would be a natural extension and a beneficial one for us,” said Anita Grove, executive director of the Apalachicola Bay Chamber of Commerce in Apalachicola, Fla.

Vast amounts of public land exist along and around the Apalachicola River, Grove said.

Homer Witcher, a 70-year-old hiker from Daleville, Va., said he’s supportive of the idea. Witcher has hiked the entire Appalachian Trail from Georgia to Maine, and plans to hike it again in a few years.

“Any time you can have more trails, it’s good, I think,” Witcher said.

However, an extended trek to or from the Gulf Coast would be more diffi cult because of concerns about cold weather farther north and in higher elevations, he said.

Many hikers take five or six months to hike the entire Appalachian Trail.