Bluegill are a favorite fish to catch 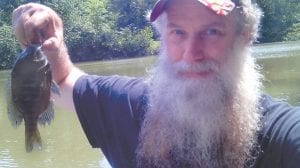 Bluegill have always been one of my favorite fish to catch, and when you hook some really big bluegill it is something special.

On a recent trip to the state of Georgia to visit family I had one of the best big bluegill fishing trips I ever had. I was blessed enough to catch several big bluegill, most over a pound and one that was over a pound and a half. To me this is a very big nice-sized bluegill. That biggest one was big enough to have mounted.

We started out fishing early in the morning off the bank and caught several nice bluegills, but when the sun got up and got things hot the bluegills moved out deeper and scattered over the lake. We took the boat and went out looking for shady deeper banks. When we fished these types of areas we did well but when we fished around grass and weeds the bite was faster and the fishing really picked up.

We fished for most of the day and I caught several big bluegill as we went down the bank. Then we went down toward an old dock that had some brush around it. I made a cast close to it and my floater took off. I set the hook, and at first I thought it was a bass by the way it pulled. As I reeled it in I saw it was a monster bluegill. It was one of the biggest I have ever seen, making this is a trip I will remember a long time.