Fishing in a small Georgia lake 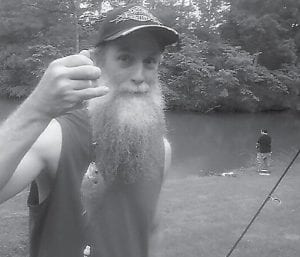 THE CATCH — Greg ‘Gabby’ Caudill shows one of the many fish, mainly bluegill and crappie, he caught during a weekend trip to a lake in Georgia. He says he will return to the lake with a plan to catch one of the 10-lb. bass that will be there waiting for his return to the private fishing hole.

Over the weekend I had the opportunity to do fishing on a 10-acre private lake in Calhoun, Ga. This lake has been around for more than 50 years, and the stories of bass more than 12 pounds being caught there are many. So I was very excited to get to fish it.

The first day I got to fish, it rained hard all day, but a few hours before dark, we got a break and were able to fish some.

The fishing started out slow and picked up as the weather got better and the skies got darker. Soon, we caught several nice bluegill including one very nice big bluegill that weighed more than one pound. As it got later, we caught some crappie and a catfish more than two pounds.

This lake has several big largemouth bass and crappie, bluegill and catfish. We had our lines broken several times by catfish. We fished until it got so dark we could not see our floaters.

The bluegill were on the nest this weekend and were hard to find and catch, but when you made a cast close to the nest the bluegill would hit the bait to protect the nest.

We are going to try to bass fish in the morning if the weather will allow. The thought of a 10-poundplus bass will bring me back to this lake for several years to come.

You can email me gabbysfishingfever@