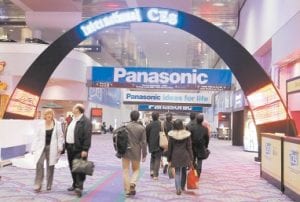 Electronics sales rebounded in the just-ended holiday season, but the industry’s biggest event will still have the recession hanging over it. The International Consumer Electronics Show, which opened Jan. 6, is smaller than usual, with key products unveiled at prices that are far from extravagant.

Manufacturers will use the show in Las Vegas to trot out the devices they hope will keep consumers opening their wallets, despite high unemployment. TVs with 3-D displays, svelte laptops and e-book readers will be the hottest categories.

Gadget makers are in a much better mood than they were a year ago, when they were shocked by a 27 percent decline in holiday sales of electronics and appliances. In the month leading up to the 2009 Consumer Electronics Show, exhibitors were canceling because they were concerned about the economy, said Jason Oxman, senior vice president at the Consumer Electronics Association, the trade association that organizes CES. 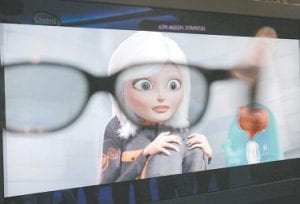 A character from the movie Monsters vs Aliens by Dreamworks is shown through 3D glasses at the Intel booth at the International Consumer Electronics Show (CES) in Las Vegas. (AP Photo)

In contrast, in the just-ended shopping season, revenue from electronics sales in the U.S. between Nov. 1 and Dec. 24 rose 5.9 percent from the same period of 2008, according to an estimate by MasterCard Advisors’ SpendingPulse, which tracks all forms of payment, including cash. The analysts don’t give a dollar figure.

And this time CES exhibitors were adding themselves to the lineup in the week before the show, Oxman said.

CES, which began in 1967, was originally focused on home entertainment gear. But with the demise of large computer trade shows in the U.S., CES is now the main venue not just for audio and video giants like Panasonic Corp., but also such pillars of the computing world as Hewlett-Packard Co., Dell Inc. and Cisco Systems Inc. Microsoft Corp. CEO Steve Ballmer will kick off the show with a keynote speech Wednesday night, an annual role he took over from Chairman Bill Gates last year.

Missing from the show, as usual, will be one of the biggest trendsetters in electronics: Apple Inc., which reveals its products at its own events.

For TV makers, CES is the opportunity to demonstrate sets that will hit stores by summer, and to preview technologies that will be available next holiday season.

The manufacturers have been fortunate that the U.S. is still in what is considered a TV upgrade cycle, with households replacing their old tube sets with flat panels. That trend hasn’t even slowed in the recession. Research firm iSuppli estimates that 33.8 million flat-panel sets were shipped in the U.S. in 2009, up 17 percent from 2008.

A major reason is that prices keep declining — a 32-inch flat panel can now be had for just over $300, which is about what old tube TVs used to cost. But new technologies that yield better picture quality and thinner sets have also enticed buyers, according to iSuppli analyst Riddhi Patel.

The challenge for manufacturers is to keep flat panels hot. In 2010, technologies already available now are likely to be enough to drive sales, Patel believes. But to keep the excitement going, manufacturers will be rolling out 3-D TV sets later in the year, and that will be a major topic at CES.

Bulky rear-projection sets with 3-D capabilities have been available for a few years, but now flat panels will get the 3-D treatment, and there finally will be a way for consumers to bring 3-D movies into the home. In December, the industry group behind the Blu-ray disc format said it had united on a standard for a 3-D version of the disc, and players are expected to be available this year. (You would still need special glasses.)

In keeping with the times, 3-D TVs won’t be much more expensive than today’s high-end sets. The difference between 3-D sets and comparable 2-D TVs will likely be less than $200. A 3-D capable Blu-ray player, however, would then add a few hundred dollars to the setup.

“The reason this is a blockbuster for TV manufacturers is that for a relatively small incremental hardware cost, they’re able to deliver a phenomenally unique and higher-quality experience,” said Jeffrey Katzenberg, CEO of DreamWorks Animation, which has made several 3-D movies.

Laptops have also continued to sell well during the recession, though some of the most popular ones have been small “netbooks” that cost about $300. At CES, there will be plenty of slightly larger laptops featuring new, powerthrifty chips and higher prices. Computer makers hope that consumers who have gotten an appreciation for light laptops from netbooks will want to pay a few hundred dollars more for a bigger screen and keyboard, and better video-playing performance.

For the first time, e-book readers will have their own section of the show floor, with 23 exhibitors hoping to follow Amazon.com Inc.’s Kindle to the cusp of the mainstream. Though a reading device like Barnes & Noble Inc.’s Nook costs $259, a lot more than a single book, it provides access to e-books that are cheaper than the printed versions, largely thanks to Amazon’s aggressive pricing policies.

With a strong new product category like e-book readers and a gee-whiz feature like 3-D for the home, coupled with an economic recovery, the show promises to be brighter than last year, if not larger.

“Certainly, at this time last year nobody knew what to expect with the state of the economy and what would be happening,” said Tim Alessi, director of product development at LG Electronics USA, which is one of the bigger CES exhibitors. “We’re looking forward to going to the show with a lot less uncertainty.”