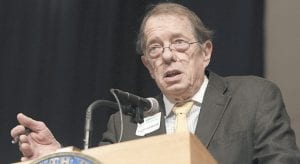 Independent gubernatorial candidate Gatewood Galbraith said the practice of mountaintop removal mining has cause unsurpassed environmental damage and should not be allowed. (AP Photo/Ed Reinke)

Independent Gatewood Galbraith has differentiated himself from all other Kentucky gubernatorial candidates by taking a strong stand against mountaintop removal mining.

Galbraith told The Associated Press that the practice has caused “unsurpassed environmental damage” in Appalachia and should not be permitted to continue.

“It is too large a cost for the extraction of coal,” he said. “I’m for coal, but mountaintop removal is the most wasteful, unsustainable method for extracting coal. It destroys an ecological heritage that belongs to all of Kentucky.”

The Lexington attorney making his fifth run for governor is the only candidate who has voiced opposition to mountaintop removal.

Galbraith won an early endorsement from the United Mine Workers of America. He said it shows that Kentucky’s working class is unhappy with the state’s political leadership. He also said his opposition to mountaintop removal isn’t a condemnation of the coal industry and especially not of coal miners.

Coal operators say the mining method the most effective way to get to the coal, while environmentalists say it does irreversible damage.

In a letter to supporters, Galbraith and running mate Dea Riley said they “stand on the side of mountains.”

“We cannot undo the injustice and travesties of the past,” they said, “but we can promise our dedication to a new future.”