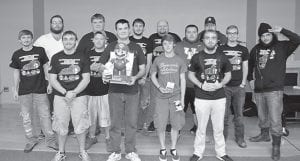 Southeast Kentucky Community and Technical College faculty, staff and students from the Whitesburg campus raised money for the Cincinnati Hospital Medical Center, a member of the Children’s Miracle Network of Hospital, with a game marathon.

Southeast Kentucky Community and Technical College faculty, staff and students from the Whitesburg campus came together recently to raise charitable funds to help children at the Cincinnati Hospital Medical Center, a member of the Children’s Miracle Network of Hospitals.

The group, “Gamers United”, participated in the annual multi-national charity event called “Extra Life.” In the 24-hour event, thousands of gamers, representing hundreds of websites and attracting more donors every year, raise money for children with medical needs. The group normally meets every Thursday night to play board, card and video games. Southeast Professor Danny Webb started the local group several years ago and the number of participants has grown tremendously. On any given Thursday in the student lounge of Caudill Hall, one can find over 20 students playing games with the four faculty and staff sponsors.

This year, the SKCTC “Gamers United” contingent hosted a “Smash for the Cause” Smash Bro. Melee video game tournament on Oct. 25 as the opening event held in the Reynolds Auditorium of the Belinda Mason Academic Building in Whitesburg. Twentysix young adults donated money and competed for the cause. Aaron Caudill, Tom Robinson and other SKCTC students organized the new activity to increase participation from the community and raise additional funds. They raised money, designed and sold t-shirts and wristbands for the cause and did promotional outreach. More than $2,300 was raised for the children of the Cincinnati Children’s Hospital Medical Center. “What made this year’s event so special was a young Letcher County girl named Lily Hall. She is the daughter of Southeast student Nick Hall,” said SKCTC staff member Ron Brunty. “The child is currently receiving continued medical help from doctors and staff at the Cincinnati Children’s Hospital Medical Center, and, at the event, Lily and her parents made an appearance. Lily was pure inspiration for everyone as she was jumping up and down in her daddy’s arms.

“This being our second year participating in Extra Life as a group, it was truly a memorable and joy-filled experience for all. This was made possible with the guidance shown by faculty and staff Danny Webb, Jason Forson, Kit Hensley, Ron Brunty and the Student Government Association members as well as the gamers who play each week at the Whitesburg campus. One could say Extra Life 2014 was truly a smash for the cause. Everyone wins,” said Brunty.