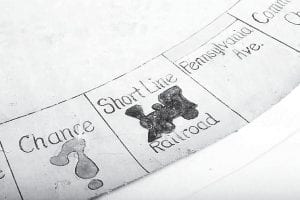 On this date 79 years ago — November 5, 1935 — the Parker Brothers company launched the game of Monopoly. Shown above left is a photo provided by The Strong children’s museum in Rochester, New York showing the oldest known version of Monopoly handmade by inventor Charles Darrow, pictured above right enjoying his game in 1958. In 2010, The Strong’s National Museum of Play was the winning bidder at Sotheby’s with $146,500 for the table-sized board game created around 1933 with pen-and-ink and gouache on a circular piece of oilcloth. It contains 200-plus pieces, including playing cards, hotels and bank notes. (AP Photo/The Strong) 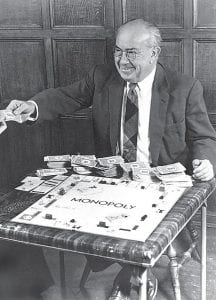