Game’s easiest shot can also be most vexing 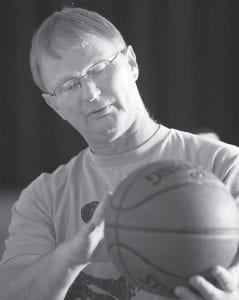 Bob Fisher worked on his basketball free throws earlier this month at a gym in Vermillion, Kan. Last month Fisher earned a spot in the Guinness Book of World Records by making 50 free throws in a minute. (AP Photo)

Clevin Hannah takes a breath and walks up to the line, straddling his feet squarely over the midpoint. The Wichita State senior spins the ball once, dribbles three times, spins it again, then gets a good grip before letting fly. Swish! Nearly every time.

If only it were that easy for everyone.

Cool and confident under pressure, Hannah is one of a handful of players around the nation who has mastered the art of the free throw, a shot that’s at once the easiest and most vexing in basketball.

“I hate to see guys miss free throws,” said Hannah, 10th in the nation at 89.6 percent through Monday. “As my coach always said, they’re free and you’ve to make ‘em to help your team win.”

Shooting a free throw seems so easy. The shooter stands at the line, no hand in his face, no one chasing from behind, just him and the basket. Heck, a guy named Fred Newman once hit 88 in row blindfolded.

There’s fatigue, particularly in the closing minutes, that makes muscles weak and concentration poor. Some players have a hard time finding a rhythm, the stagnancy of standing at the line tougher than shooting in the flow of the game. It’s not easy shooting when opposing fans are waving and jumping up and down, either, not to mention the pressure of having all eyes on you, particularly with the game on the line.

The 15th-ranked Longhorns have been befuddled at the freethrow line all season, particularly over the past month, when they’ve lost five of eight in a precipitous drop from the top of the polls.

“They all know their problems and they all work on it in practice,” Texas coach Rick Barnes said. “The problem (is) when it gets to the game and it’s time to do what you’re supposed to do, they don’t trust whatever they’ve done up to that point. That, from my point of view, is what I think has to happen. They’ve got to trust what they’re doing.”

Mostly, it comes down to mechanics, being able to repeat the same motion every time.

Fisher has mastered that part of it.Th

e former high school coach and soil conservation technician has turned his analytical mind to the study of shooting free throws, filling his home with books, graphs, physiology manuals, medical studies, gadgets he created. He’s approached freethrow shooting from every possible angle, so to speak, filling binders with information on everything from stance and arc to physics and anatomy.

Last month, Fisher earned a spot in the Guinness Book of World Records by making 50 free throws in a minute. He did it by calculating the 48 factors that affect a shot, from the strongest position of his wrist based on the bucket-carrying angle of his elbow (about 7 degrees ulnar deviation) to the digit ratio of his index and ring fingers to determine which of the four release points — and corresponding hand position — fits best.

“It’s all mechanics,” said Fisher, who runs Fisher Sharp Shooters from his home on the Kansas plains. “The reason people struggle with free-throw shooting is because they’re trying to steer the ball into the basket. That wrist snap in the last .15 of a second, they’re deviating, trying to steer it. That is not a repeatable motion.”

OK, it’s about repeating the same motion every time. Problem is, we’re human beings, not robots. Precisely repeating the same motion is impossible, even for the best shooters. There are just too many variables. One way to minimize deviations is to take the same approach to every free throw. Golfers have routines when they putt or hit a shot, and a similar tactic works for free-throw shooters, giving them a way to block out everything else going on around them.

Appalachian State’s Donald Sims likes to plant his right foot five boards from the nail in the middle of the line, spin the ball, dribble three times, then spread his fingers across the ball’s seams to get a comfortable grip before shooting. Sims is doing something right; he leads the nation at 95.6 percent.

“It goes back to the consistency aspect — you want to do the same thing every time you shoot one,” Sims said. “Doing the same routine every time helps me shoot the same way every time.”

Of course, nothing works better than confidence.

Miss a few shots and suddenly the hoop seems a little smaller, the ball a little tougher to grip. Memphis experienced the downward spiral of failing confidence in the 2008 national championship, missing one free throw after another to give Kansas a chance to win the title in overtime.

Good free-throw shooters go to the line knowing they’re going to make it, shrug it off and move on to the next in the rare occasions they do miss. That’s how it works for Portland State’s Dominic Waters, seventh in the nation at 90.2 percent.

“It’s having the confidence and knowing you’re going to do it is the main thing for me,” Waters said. “It’s not about the crowd or anything. I don’t really notice them at all. It’s just concentrating on the hoop and having the confidence of knowing it’s going in. It’s like a layup for me.”