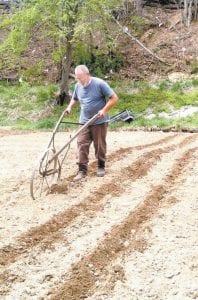 Raising a garden and selling produce at the Letcher County Farmers Market in Whitesburg has given Don Maggard a new purpose after a back injury left him no choice but to quit his coalmining job.

Don Maggard raises a garden. His garden has raised him up too.

Maggard, 63, worked underground in coalmines for 37 years before his back finally gave out and he underwent surgery five years ago.

Unable to work in mining ever since, Maggard felt he had no choice but to apply for disability benefits. He was essentially forced to retire at 58 years old, something the active and motivated man would never have dreamed he’d do.

“ The hardest part,” he said, “was having nothing to do.”

Boredom led to depression. His life had lost its meaning. He had a loving family, church and good friends, but was still sad because he felt useless.

Out of long habit, he continued to get up at 4:30 every morning and then had nowhere to go. Then, after a year or so, he decided to expand his family garden.

He joined the Grow Appalachia at Cowan Community Center organization and began to explore new options. Now, he is a regular seller at the Letcher County Farmers Market in Whitesburg, makes a good supplemental income, and has found a new lease on life.

“I just love watching it grow. I’d do it if I didn’t make a dime,” he said. “But I wish I could have gotten into this a long time ago and not just depended solely on mining. The way mining is, it’s so up and down.”

When it’s not gardening season, Maggard still finds plenty to do to occupy his time. He has attended canning classes, and has taken field trips with the Grow Appalachia group to other farming operations where he learned about organic fertilization, pest control and different crop covers.

He has earned a Micro-processing certification that enables him to sell canned goods and a certification for home-based processing for candies and breads and other homemade products. He’s now working on obtaining a “Farm Number,” which makes him eligible for grants to expand his farm with better equipment.

Maggard plans to sell his canned goods under the brand, “Sweet Don’s Corn.”

Now, he is working on expanding his Farmers Market offerings with about 40 fruit trees that should bear fruit in the next two to three years, and is interested in trying some nut trees.

That’s not all. Maggard sells the roots and medicinal herbs he finds in the woods, such as ginseng, to dealers and has researched the process for making homemade hominy with his corn this year.

Even his health is better now that he is gardening.

Maggard walks to his garden — located about half a mile from his house on Big Branch in Perry County — twice a day. He believes the exercise keeps him healthy and that his back pain would be much worse if he didn’t keep moving. His back hurts worse in the winter when he can’t walk or tend his garden.

Maggard still sometimes needs help from his three grandsons, or his daughter Abigail Maggard, who is a co-manager of the Farmers Market. But he enjoys that part: showing the younger generations how to plant and tend and reap food from their own land with their own hands.

“They need to see what you can benefit from growing a garden,” he said.

He is the seventh of 12 children raised during a time when a garden was critical to keeping a big family fed.

“If we had another depression, I don’t know what the young people would do,” he said. “They would starve to death.”

Besides the financial and health benefits, gardening and selling at the Farmers Market has brought Maggard other benefits — friendship with the other farmers, boosting the local economy, and teaching the kids about a healthy way of life.

Perhaps most would agree, that with everything he has overcome, there is plenty that Don Maggard could teach.