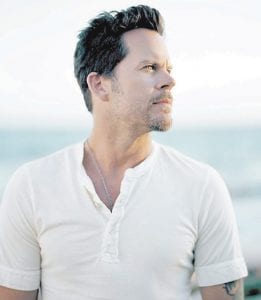 Gary Allan’s new album is is ‘Get Off on the Pain.’ (AP Photo/MCA Nashville)

When Gary Allan was 15, his father refused to sign his first record contract. He thought his son was an imitator.

It took a long time, but Allan realized that Harley Herzberg, who played with his son in honkytonks, had a point, and that decision helped him become something truly original — a Southern California surfer with a love of punk turned platinum-selling country star.

“You know he was right and I don’t think that I realized that until I was about 23,” Allan, 42, said. “He used to have this saying that you need to play for the people that love you, the people that hate you and the people that could care less, and then in that you’ll find a way to play for yourself. Which was just a bunch of nonsense I think until I was about 23. And then I became so settled in the band that I’d had for so long, you didn’t think about how you were going to play or how you were going to say something. You just did it the way you do it.”

And the way Allan does it has worked out just right. His last two albums went platinum and there are high hopes for his latest, “Get Off on the Pain.”

Allan took time to talk by phone from Los Angeles about the new album, continuing the family music tradition and moving on from tragedy.

The Associated Press: Your daughter, Dallas, played “The Night They Drove Old Dixie Down” at your recent show at Ryman Auditorium. Are you continuing the family tradition?

Allan: I’m always shocked by their taste. For my 16-year-old to go find a song by The Band just blows me away. And let alone learn it on the piano. I was kind of singing it while I was walking around the house for a couple of days and then at breakfast I go, “Man, why don’t we do that at the Ryman.” I actually thought I’d scare her off .

AP: You often talk of your love for punk and rock ‘n’ roll. How do you get from there to country star?

Allan: (Rock ‘n’ roll is) kind of what I grew up on. I think when it really changed, when country became like rock for me, was during the Highwaymen tour. I saw that when I was like 14 or 15. That was with Waylon (Jennings) and (Kris) Kristoff erson, Willie (Nelson) and Johnny Cash. I was just blown away by that, by people just singing truth. No jumping around, not a lot of production. Just four dudes up there just singing to you. And it was very cutting to me. And I think that’s when I knew this was what I wanted to do.

AP: Those who know you say you’re happier than you have been in the years since the suicide of your wife, Angela. Is that responsible for the new album’s more upbeat feel?

Allan: I was in a good space and I think probably the reason you hear that is because probably the last two albums came after my wife passed and a lot of the writing dealt with that. I feel like this is definitely more like a party, foot’s-been-lifted-off-my-head album. It’s fun to play live. It’s definitely a lot more upbeat than our last albums. But it still has a reflection on it.

AP: One of those reflective moments comes on “No Regrets.” It seems like a song about moving on, but is still wistful.

Allan: I think peaceful. I think it would be wrong for me to not acknowledge that, because I think people that go through stuff with you kind of look for those songs, you know, especially if they’re in the same boat. For me it was just a way of letting everybody know that I’m sleeping good at night, and I’m in a good place with it.