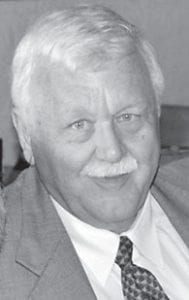 He was born in Letcher County to the late Marcus Van Yonts and Anna Lee Skaggs.

He was graduated from Fleming-Neon High School, and received a music scholarship to attend the University of Kentucky where he marched for the Wildcat Marching Band.

Mr. Yonts later received a Bachelor’s Degree in Mathematics from UK, and was a high school math teacher in Letcher County for several years before pursuing a career in computer science.

He moved to Cape Canaveral, Florida, where he worked as a computer consultant at NASA during the Apollo space program then returned to Lexington to work for IBM/Lexmark for the next 30 years.

Mr. Yonts was a baseball coach, President and Treasurer of the Bryan Station Band Parents Association, and a lifelong UK football and basketball fan.

Each year, he would raise over a thousand tomato and pepper plants from seed, and then spend the next few months giving them away to anyone who was interested.

Funeral services for Mr. Yonts were conducted Saturday, April 7, at Kerr Brothers Funeral Home in Lexington. Burial was in the Lexington Cemetery.