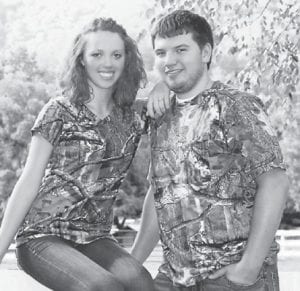 Tim and Pam Allen announce the forthcoming marriage of their daughter, Andrea Allen, to Brian Roark, the son of Brian and Abby Roark. The wedding will take place at 2 p.m., Saturday, May 24, at the Calvary Campus on Hwy. 7 at Letcher. The bride and bridegroom are 2011 graduates of Letcher County Central High School. She will be a senior at the University of Bellarmine, majoring in nursing. He is enrolled in pharmacy school at Sullivan University and has already completed three years at Morehead State University. The custom of an open wedding will be observed.

Brrrr! I hope you haven’t put your long johns away if the weather is as chilly in your little corner of the world as it is in the Ohio Valley area. There was frost predicted in the low-lying area, which is where I live, but there was so much fog that I couldn’t see if it frosted or not.

The days are beautiful, just cold in the morning and night.

Thanks for the cards and messages of sympathy for my brother Jerry Hall’s sudden death. It has been a rough blow, and still don’t understand some things, but I’ll just have to accept and regret I didn’t make it in time to see him one last time.

I am losing another friend, this time by a change of address and scenery.

So many of you have read a lot about a favorite bluegrass band, RR2 from Rising Sun, Ind. Gary Eldridge is one of the best mandolin players, and singers.

Gary is leaving RR2 and moving to Florida. Gary decided to take up deep sea fishing as a pastime, and I think someone said he had caught a shark.

When I saw the picture I laughed and said it looked like a whale, but what do I know about fishing?

Gary will be missed by his family, especially his mother Glenora Eldridge, and a granddaughter who worships him.

Since I was gone for almost a week, my yard was neglected, and then it rained so much that it begin to look like a hayfield.

A friend stopped by and aired the tires up and got my riding lawn mower running. I took a couple of swipes through the yard, and all at once I heard a shrieking noise. White smoke billowed from underneath, as a belt that engages the deck broke, so that was the end of mowing.

My front yard was absolutely killing me as it looked so scraggly. Being the hillbilly that I am, and very proud of it, I found my small, electric Weed Eater in my garage, so I cut my front yard with a Weed Eater.

I finally found someone who has a lawn service, and the kid is wonderful, and he did such a good job.

Someone sent me a message and said that with having so many friends, surely someone would be glad to help. All I have to say is that in this fast-paced life there are not many who have time to help someone. In the first place I won’t ask, friends nor family!

I would have sat down with a pair of scissors and cut my whole yard, before I would ask.

Since I stayed three days, which was sudden and unexpected, at the motel in Whitesburg plus other expenses, it left me on the short end of a stick, as the saying goes.

Sunday, I went on another adventure to Fairborn to a bluegrass music event at OKI.

Evan Lanier & Bluegrass Express was supposed to open for Vern McIntyre & Appalachian Grass, but the bands got switched.

I was about 10 minutes late getting there, and just as I sat my purse down, the band started playing a good dance number. I saw my dancing partner Howard sitting not far away. I walked in front of him with an outstretched hand, Howard took my hand and we danced.

Belated happy birthday to Howard Moore, who cel- ebrated his 90th birthday May 17. He is a World War II veteran. Howard is starting to slow down a little.

I wasn’t feeling my best, but I drove 70 miles one way to dance with Howard one more time.

Oh to live through the things this wonderful man has, and still be so mentally alert. His legs are giving him a little trouble so we sat and patted our feet and clapped our hands.

Howard is Norma Ashcraft’s uncle, so she brought a carrot cake for him.

Before starting on my journey to Fairborn, I stopped by our local Kroger’s to get a birthday card for Howard, and somehow a beautiful butterfly bush just hopped in my cart. After I left the store and was actually on the interstate, I discovered my glasses were missing out of my purse.

I made a U-turn where you aren’t allowed, and went back to Kroger’s but no one had turned them in. I left my telephone number, and as I was about a halfmile from the store, the woman in customer service called to tell me someone had found them in a cart.

While I was struggling with the small butterfly bush, I had somehow lost them in the cart. I was very fortunate.

Please keep the families of Les and Pat Wagner and Larry and Becky Hasty in your prayers as their Aunt Ethel isn’t doing very well.

Larry is having a rough time also as his hip replacement isn’t healing good.

Congratulations to Larry and Becky’s daughter Polly as she graduated from nursing school. Hello to my sweet little Kelly.

Doyle and Betty Ison are doing alright. You can’t keep these two down.

Well I must admit, I forgot what day it was and I fell asleep.

P.S. Hello Oma Hatton, here’s hoping you are doing alright, this is a joke between Oma and me.

Hello to my sisters-inlaw Mattie and Wanda Hall.