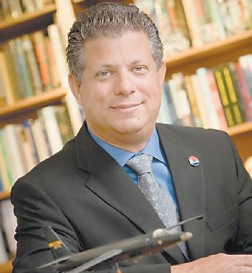 The son of U-2 spy plane pilot Francis Gary Powers is coming to Letcher County this week to help set the record straight about his father’s conduct after his plane was shot down over the Soviet Union more than 50 years ago.

Francis Gary Powers Jr., who goes by the name Gary, will give a lecture at 6 p.m. on Sept. 24 at the Letcher County Central High School Auditorium. The admission fee is $15. The next day Powers will serve as the grand marshal in The Mountain Heritage Festival Parade in downtown Whitesburg.

“I am deeply honored and proud to be able to participate in Letcher County’s Heritage Festival,” said Powers. “It means a lot to me to have been invited down to speak about my father and participate in the parade as grand marshal.”

On May 1, 1960, a Soviet Union S-75 Divina missile missile shot down the U-2 spy plane Francis Gary Powers, a native of Burdine, was operating. The aircraft was equipped with a high tech camera. The self-destruct mechanism located in the plane was not activated and Powers was captured.

Above left is a photo of Francis Gary Powers taken shortly after his release by Russian officials. Above right is the Pound, Va., home of Powers as it was shown in news photographs on May 5, 1960, when it was learned the Lockheed aircraft test pilot was being held in Russia on spy charges. Mr. and Mrs. Oliver W. Powers, the parents, said “Thank God he’s alive.” (AP Photos)

“After being captured all sorts of rumors, misinformation, and false accusations began to appear in the press about my father’s conduct and loyalty,” said Gary Powers Jr. “Some reports said he told the Soviets everything he knew. Some others said that he had landed the plane intact and defected or that he had not followed orders and committed suicide. All of which were false.”

Powers said in addition to discussing the U-2 program and incident on Sept. 24, he will also talk about growing up in the shadow of a famous figure.

“My dad taught me that my word is my honor,” said Powers. “He also taught me to do my best at whatever I decided to do.”

Powers said he wants to “help set the record straight about my father’s conduct and loyalty to America after being captured.” 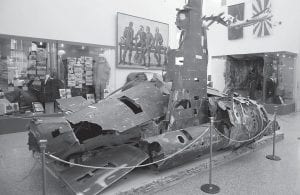 The charred wreckage of of U.S. pilot Francis Gary Powers’ U-2 spy plane was on display at the Central Armed Forces Museum in Moscow on April 30. Fifty years ago this year, Powers, a Letcher County native, was shot down while flying a U-2 spy plane over the Soviet Union, a dramatic episode of the Cold War that pushed the rival superpowers closer to confrontation. By telling his late father’s story, his son, Francis Gary Powers Jr., hopes to help preserve Cold War history and prevent future generations of Russians and Americans from ever again facing the threat of nuclear war. (AP Photo/Alexander Zemlianichenko)

“Growing up, I did not know what to believe,” said Powers. “Because of the extensive amount of research I have done over the last 20 years, I am confident that what I have uncovered is the truth as to what took place so other opinions do not bother me.”

He will also talk about the need to preserve Cold War history though the creation of The Cold War Museum in Vint Hill, Va.

“I founded The Cold War Museum to honor Cold War veterans, preserve Cold War history, and educate future generations about this period of world history,” said Powers. “Students entering college today have no direct memories of the Cold War. In order for them to understand the world today, they must first understand Cold War history and its legacy which we are living in today.”

This past May Powers visited Moscow to mark the 50th anniversary of the U-2 incident.

“It was a great trip. I was able to give a lecture at the Central Armed Forces Museum where the U-2 wreckage is displayed, a presentation at the U.S. Embassy, and I talked with many people about the need to preserve Cold War history for future generations,” said Powers. “The highlight of the trip was being on Red Square for the May 9 Victory Day parade and seeing the military units, tanks, and missiles go by.”

An historical marker honoring Francis Gary Powers is located in front of the Letcher County Courthouse.

“It is a great honor to have my father recognized by the citizens of Letcher County with this historical plaque,” said Powers. “The Powers family has always been proud of Francis Gary Powers, and it is nice to see that other citizens feel the same way.”

At the age of 47, Francis Gary Powers, who was reared in Pound, Va., died in 1977 in a helicopter crash. Working for a California news station, he was piloting a helicopter, which ran out of fuel and crashed. He is buried in Arlington National Cemetery.