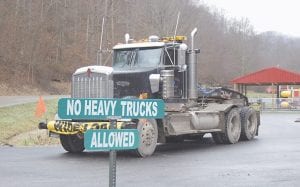 ARROGANCE OR STUPIDITY? — After fielding complaints about damage heavy trucks have caused to a new community park at Thornton, the Letcher County officials on Monday installed signs ordering the trucks, which have been working nearby on an Equitable Resources natural gas project, to stay out of the park. The warning did little good, however, as gas company workers ignored the signs on Tuesday. More photos appear inside. (Photo by Ben Gish)

Misdeeds and damage to public property associated with a natural gas construction project at Thornton have resulted in a flurry of complaints from angry citizens and a stern warning to gas companies from Letcher Judge/Executive Jim Ward.

Ward issued a statement Tuesday night saying that his office will no longer permit natural gas companies to “cross or use county roads” until the natural gas industry atones for damages caused by heavy trucks parking illegally inside a new community park at Thornton.

“Because of the irresponsible behavior of some of those associated with the gas companies I will not sign any agreements to allow crossing or use of county roads until I have assurances that this will not happen again,” Ward said in a statement released just before The Mountain Eagle went to press. “This will not be tolerated in Letcher County.”

Two natural gas wells and a large gathering line are being installed near the newly-constructed park by Equitable Resources Inc. of Pittsburgh, Pennsylvania, one of the nation’s largest natural gas producers. The company contracts with others to drill wells and install lines.

Thornton resident Randall Baker, one of a number of community volunteers who helped get the park up and going, said he contacted Ward’s office after he was told about the damage, went to see it for himself, and found a truck and trailer used to haul heavy equipment inside the park.

“They don’t have any respect for anybody’s property,” Baker said, adding that he has been trying for seven weeks to get Equitable to fix a 40-foot section of fence that was torn down on his property while gas wells were being drilled nearby.