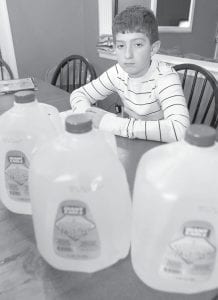 Jay Miller, 12, sits behind three jugs of bottled water on the kitchen table. The Miller family buys bottled water for Jay, who has allergic reactions to sulfates, when the level of that pollutant rises in their tap water. Last year, Miller mysteriously developed hives that itched and bothered him for two weeks. Then his mother read about spiking levels of pollution in the nearby Monongahela River, the source of their tap water. (AP Photo)

A drilling technique that is beginning to unlock staggering quantities of natural gas underneath Appalachia also yields a troubling byproduct: powerfully briny wastewater that can kill fish and give tap water a foul taste and odor.

With fortunes, water quality and cheap energy hanging in the balance, exploration companies, scientists and entrepreneurs are scrambling for an economical way to recycle the wastewater.

“Everybody and his brother is trying to come up with the 11 herbs and spices,” said Nicholas DeMarco, executive director of the West Virginia Oil and Natural Gas Association.

Drilling crews across the country have been flocking since late 2008 to the Marcellus Shale, a rock bed the size of Greece that lies about 6,000 feet beneath New York, Pennsylvania, West Virginia, Ohio and Kentucky. Geologists say it could become the most productive natural gas field in the U.S., capable of supplying the entire country’s needs for up to two decades by some estimates.

Before that can happen, the industry is realizing that it must solve the challenge of what to do with its wastewater. As a result, the Marcellus Shale in on its way to being the nation’s first gas field where drilling water is widely reused.

The polluted water comes from a drilling technique known as hydraulic fracturing, or “fracking,” in which millions of gallons of water, sand and chemicals are blasted into each well to fracture tightly compacted shale and release trapped natural gas.

Fracking has been around for decades. But the drilling companies are now using it in conjunction with a new horizontal drilling technique they brought to Appalachia after it was proven in the 1990s to be effective on a shale formation beneath Texas. Fracking a horizontal well costs more money and uses more water, but it produces more natural gas from shale than a traditional vertical well.

Once the rock is fractured, some of the water — estimates range from 15 to 40 percent — comes back up the well. When it does, it can be five times saltier than seawater and laden with dissolved solids such as sulfates and chlorides, which conventional sewage and drinking water treatment plants aren’t equipped to remove.

At first, many drilling companies hauled away the wastewater in tanker trucks to sewage treatment plants that processed the water and discharged it into rivers — the same rivers from which water utilities then drew drinking water.

But in October 2008, something happened that stunned environmental regulators: The levels of dissolved solids spiked above government standards in southwestern Pennsylvania’s Monongahela River, a source of drinking water for more than 700,000 people.

Regulators said the brine posed no serious threat to human health. But the area’s tap water carried an unpleasant gritty or earthy taste and smell and left a white film on dishes. And industrial users noticed corrosive deposits on valuable machinery.

One 11-year-old suburban Pittsburgh boy with an allergy to sulfates, Jay Miller, developed hives that itched for two weeks until his mother learned about the Monongahela’s pollution and switched him to bottled or filtered water.

No harm to aquatic life was reported, though high levels of salts and other minerals can kill fish and other creatures, regulators say.

Pennsylvania officials immediately ordered five sewage treatment plants on the Monongahela or its tributaries to sharply limit the amount of frack water they accepted to 1 percent of their daily flow.

“It is a very great risk that what happened on the Monongahela could happen in many watersheds,” said Ronald Furlan, a wastewater treatment official for the Pennsylvania Department of Environmental Protection. “And so that’s why we’re trying to preempt and get ahead of it to ensure it doesn’t happen again.”

Regulators in Pennsylvania are trying to push through a new standard for the level of dissolved solids in water released from a treatment plant.

And in New York, fracking is largely on hold while companies await a new set of state permitting guidelines.

For now, the Marcellus Shale exploration is in its infancy. Terry Engelder, a geoscientist at Penn State University, estimates the reserve could yield as much as 489 trillion cubic feet of gas. To date, the industry’s production from Pennsylvania, where drilling is most active, is approaching 100 billion cubic feet.

Wastewater from drilling has not threatened plans to develop the nation’s other gas reserves. Brine is injected into deep underground wells in places such as Louisiana, Texas and Oklahoma, or left in evaporation ponds in arid states such as Colorado and Wyoming.

However, many doubt the hard Appalachian geology is porous enough to absorb all the wastewater, and the climate is too humid for evaporating ponds. That leaves recycling as the most obvious option.

Entrepreneurs are marketing portable systems that distill frack water at the well site.

Also, in southwestern Pennsylvania, Range Resources Corp., one of the gas field’s most active operators, pipes wastewater into a central holding pond, dilutes it with fresh water and reuses it for fracking. Range says the practice saves about $200,000 per well, or about 5 percent.

In addition, a $15 million treatment plant that distills frack water is opening in Fairmont, W.Va. The 200,000 gallons it can treat each day can then be trucked back for use at a new drilling site.

For years, regulators let sewage treatment plants take mining and drilling wastewater under the assumption that rivers would safely dilute. But fracking a horizontal well requires huge amounts of water — up to 5 million gallons per well, compared with 50,000 gallons in some conventional wells.

“In this case,” said John Keeling of MSES Consultants, which designed the Fairmont plant, “dilution is not the solution to pollution.”