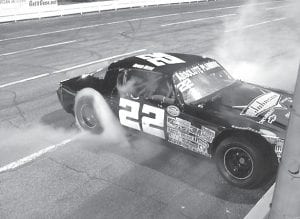 Lance Gatlin scored his 10th victory of the season in the final Late Model feature for 2012 at Lonesome Pine Raceway in Coeburn, Va.

Jeff Woodward laid down the fastest time in qualifying to put his No. 94 Ford Fusion on point for the 60-lap race.

The green-flag was out andpolequalifierJeffWoodward and second place Brian Blevins were battling hard for the top spot. Woodward finally cleared Brian Blevins (No. 40) on the fifth circuit. Ronnie Mc- Carty and the 2012 LPR track champion Gatlin were battling hard for third place, allowing leaders Woodward and Blevins to pull away. With no pressure from behind, Blevins charged hard up to Woodward as the two battled “neck and neck,” but Woodward would once again overpower the Chevrolet Impala of Blevins.

With the battle up front sorted out, Ronnie McCarty was still working on the Gatlin’s No. 97. McCarty got around Gatlin, taking Ryan Stiltner with him on the inside. Jeff Woodward began to lose ground quickly allowing Blevins, Stiltner (No. 22) McCarty (No. 5) and Gatlin to pass. 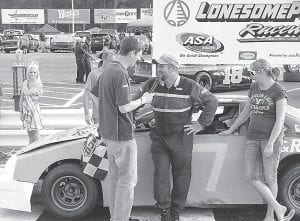 Driver Brad Ball (center) is all smiles as he is interviewed after taking the Mod-4 championship.

By halfway (lap 30), the top five cars had caught lap-traffic, and the lapped vehicles were not making it easy as the top cars were battling to lap the No. 44 of Jody Bostic and the No. 51 of Willie Gibson. Gatlin knew that it was then time to go and began to reel in Mc- Carty. After a hard-fought, Gatlin cleared McCarty on lap 50 with nine laps still to go.

Now in third place, Gatlin set his sights Stiltner, who was running second. Gatlin drove hard into turn one, getting to the inside of Stiltner in the middle of turns one and two, and clearing him coming off turn two and onto the backstretch. With five laps to go, Gatlin was closing in on race leader Blevins and cleared him with only three laps left to win the race and the season championship.

The Mod-4 championship was also on the line Saturday at LPR between the No. 17 of Brad Ball and the No. 88 of Joshua Gobble. Ball and Gobble entered the race tied for first place in the Mod-4 standings, meaning the highest finisher of the two would win the title.

Gobble had the fastest time in qualifying, but after an invert of two, Freddie Taylor Jr. (No. 16) was on point.

In a race that meant so much in terms of title hopes, the field took the green flag and Taylor jumped to the lead. Now it was time to settle the championship. Gobble was running second with Ball running fourth. Ball finally cleared Gobble for third place and began to gain ground on the young Gobble. Ball cleared Gobble, but Gobble did not give up and charged back on the bumper of the No. 17.

Racing hard for thirdplace just after halfway on lap 16, David Brown (No. 12) and Gobble (No. 98) tangled on the backstretch, sending Brown backwards into the inside wall. After repairs were made to the Brown’s car, the driver showed his displeasure with Gobble and tagged him while the field was still under caution. Officials calmed to two drivers and the field was set to go back green.

Taylor once again jumped to the lead as Ball and Gobble continued their battle for second-place and the Mod-4 title. Ball once again overtook the 16-yearold Gobble. Taylor had just taken the white flag signifying the last lap of the race when the No. 9 of Kevin Canter spun off of turn two and was tagged by the No. 7 of Ron Hensley. Taylor took the checkered followed by Ball and Gobble, giving Ball the championship.

In the Street Stock division, Rob Austin was on point after an invert of two. Austin had a little room over second-place Roger Neece when the caution waved on the second lap. The Street Stock field was set for the restart and Neece in the No. 22 quickly jumped to the lead over the No. 25 of Austin.

The yellow flag came out again on lap 10 because of smoke coming from the No. 00 of James Owens. Owens’s car was diagnosed as OK to continue by LPR officials. Neece had no competition as he jumped back to the lead on the restart. Joey Sykes in the No. 23 machine and Austin (No. 25) were door-to-door on lap 19 for second place.

Sykes had the inside line and could power to the inside of Austin entering the corner, but Austin could accelerate faster and pull the No. 23 off the corner. Sykes finally cleared the Camaro of Austin as Neece drove to the victory in the final Street Stock points race of 2012 and also claimed the 2012 LPR Street Stock title.

Chase Breshears is a racecar driver and a senior at Letcher County Central High School.