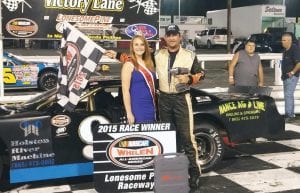 Lance Gatlin celebrated at Lonesome Pine after his first win of season. (Photo by Chase Brashears)

Kres VanDyke set fast time in qualifying, but opted to make adjustments to his No. 15 prior to the race and start at the rear of the field. Gatlin inherited the pole starting position and elect the outside lane for the start.

Gatlin and Ryan Stiltner led the field to the green flag to start the 60-lap race. Contact between VanDyke and Jenna Wagner sent VanDyke into the outside wall and forced the caution out on the opening lap.

With the field set for a complete restart, Stiltner took the lead on the start. Gatlin battled back on the inside to take over the lead on lap seven.

On lap nine, Stiltner spun with a flat right-rear tire and the yellow flag waved for the second time.

Stiltner’s spin relegated him to the rear of the field with Phillip Harris taking over second place. Gatlin again roared back to the lead on the restart. Only one lap was completed before Wagner’s car slid hard into the outside retaining wall, bringing the yellow flag out again.

Gatlin regained the lead on the ensuing restart. With 26 laps in the books, the caution flew again for a spin in the fourth turn.

On the restart, Gatlin took the lead as Stiltner had made his way back to the second position. Stiltner battled hard with Gatlin and took over the top spot on lap 29.

The race’s final caution waved on lap 30 for a spin in turn one.

Back under green, Gatlin battled Stiltner for the lead. Stiltner completed the pass on Gatlin exiting turn two on lap 32.

Gatlin made a final run at Stiltner and took over the lead on lap 46. Gatlin pulled away and captured the checkered flag for his first win of the season.

“We’ve been looking for a win and finally we found it,” said Gatlin. “This isn’t the way we want to get a win with the competition having trouble, but a win is a win.”

David Brown and Keith Stiltner made up the front row for the 30-lap Modified Street race.

Brown took the lead to open the race. The race’s first caution waved just one time in lap 16 when Robbie Allison and Joey Sykes spun in turns one and two.

Brown regained the lead on the restart. Brown soon found himself on trouble as his No. 13 machine spun, getting tagged by Rob Austin.

Stiltner gained the lead on the restart and never relinquished for the win.

Billy Ketron pulled to an early lead from the pole position of the Pure 4 race. Ketron led all 25 laps of the race to claim the victory. The win was Ketron’s first win of 2015 at Lonesome Pine.

Rocky Yates took the lead from Joshua Gobble on the opening lap of the Mod 4 feature. A spin in turn two forced the caution out just two laps into the race.

On the restart, Yates and Gobble battled once again. The two battled door to door until the yellow flag was displayed on lap 10 for debris on the backstretch.

Yates took the lead on the restart, but the caution waved again on lap 16 as the No. 2 slowed with a blown tire.

Yates pulled away on the restart to claim the checkered flag.

Duke Bare dominated his first Pure Street race of the season. Bare pulled to the lead racing into turn one on the opening lap and never looked back to capture the win.