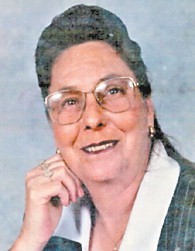 A daughter of the late Troy and Arleana Smith Halcomb, she was also preceded in death by a brother, Dewey Halcomb.

Surviving are her boyfriend, Willie Johnson; a son, Tom Watts of Hallie; a daughter, Darlene Howard and husband Darryl of Bonnyman; two brothers, Harlan Halcomb of Beehive and Julius Lee Halcomb of Delphia; three sisters, Marie Cress and Jeanette Tessner, both of Delphia, and Margaret Clark of Indiana; and two grandchildren, Matthew Howard and Lucas Howard.

Funeral services were held May 14 at the Cedar Grove Old Regular Baptist Church. Burial was in the Watts family cemetery at Hallie.