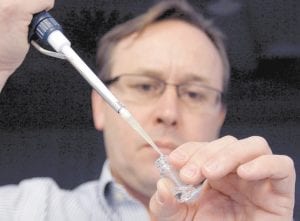 Dr. David Becker holds up a sample of wound-healing gel at his laboratory at University College, London. British scientists are about to begin a final phase of testing on a new gel that heals wounds up to five times as fast as normal treatment. The gel, named Nexagon, works by interrupting how cells communicate and prevents the production of a protein that blocks healing. That allows cells to move faster to the wound to begin healing it.

For three years, Connie McPherson had debilitating leg ulcers that were so painful she sometimes couldn’t sleep. Despite repeated surgery, antibiotics, steroids and other treatments, nothing helped.

Then last year, she took part in a trial for a new gel aimed at chronic wounds.

“It was the answer to my prayers,” said McPherson, 58, a real estate agent in Tulsa, Oklahoma. Within weeks, McPherson said the ulcer treated was completely healed. “I tried everything possible and this is the only thing that worked.”

The gel used to treat McPherson was developed by a team led by David Becker, a professor of cell and developmental biology at University College London. The gel, named Nexagon, works by interrupting how cells communicate and prevents the production of a protein that blocks healing. That allows cells to move faster to the wound to begin healing it.

Though it has only been tested on about 100 people so far, experts say if it proves successful, the gel could have a major impact on treating chronic wounds, like leg or diabetes ulcers, and even common scrapes or injuries from accidents. 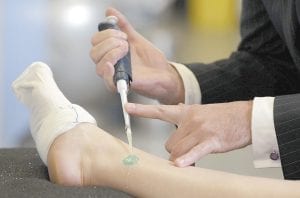 Though it has only been tested on about 100 people so far, experts say if it proves successful, the gel could have a major impact on treating chronic wounds, like leg or diabetes ulcers, and even common scrapes or injuries from accidents.

In most chronic wounds, Becker said there is an abnormal amount of a protein involved in inflammation.

To reduce its amount, Becker and colleagues made Nexagon from bits of DNA that can block the protein’s production. “As that protein is turned off , cells move in to close the wound,” Becker said. The gel is clear and has the consistency of toothpaste.

In an early study on leg ulcers, scientists at the company Becker co-founded to develop the gel found that after four weeks, the number of people with completely healed ulcers was five times higher in patients who got the gel versus those who didn’t. The average leg ulcer takes up to six months to heal and 60 percent of patients get repeated ulcers.

Other experts said the gel appeared promising. “It looks like the gel has a good effect in getting the outer layer (of skin) to restore itself,” said Phil Stephens, head of tissue engineering and repair at Cardiff University. Stephens is not linked to Becker’s research.

Still, Stephens said it is crucial the gel doesn’t interfere too much with the inflammation process. “You need infl ammatory cells to get in there and clean up the wound,” he said.

The gel has also been used on a handful of people who have suff ered serious chemical burns to their eyes, including a 25-year-old workman in New Zealand who accidentally squirted liquid cement into one of his eyes. In that case and five others, after Nexagon was applied, the outer lining of the patients’ eyes and the blood vessels within them regrew, saving their vision. In the U.S., the gel has been granted approval by the Food and Drug Administration for serious eye injuries.

“This gel has the potential to do a lot of good,” said Dr. Thomas Serena, founder and director of the Penn North Centers for Advanced Wound Care in Pennsylvania. Serena has no financial ties to Nexagon, but is one of the primary investigators for a U.S. trial of the product.

Another study is planned soon which experts said should answer more questions like the right dosage of the gel and any side effects.

In the U.S., there are 70 million people with chronic wounds. With increasing rates of obesity, experts predict there will soon be many more people suff ering from diabetic ulcers.

Other gels are on the market, but don’t work for everyone. Bioengineered skin, a protein that regulates cell growth and division, and even maggots are among the few other treatments that have been found to speed up healing.

Brad Duft, president of CoDa Therapeutics, which is developing the new gel, would not say how much Nexagon currently costs to make, for proprietary reasons.

He said the gel is still a couple of years away from being on the market and the price will drop significantly when that happens. Some leg ulcer patients spend about $30,000 a year or more on treatment. Duft said the new gel would cost a fraction of that.

For McPherson, the experience of being treated with Nexagon was so positive she asked to be included in the gel’s next trial, to treat an even larger ulcer that wasn’t eligible for the first study.

“To have something that works would change my life,” she said.