By KELLEN HENRY The Charleston Gazette 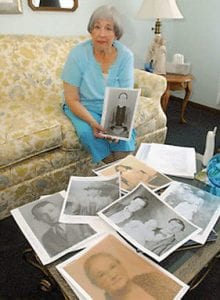 Nancy Sparks Morrison holds a photo of her greatgreat grandmother, Mary Collins, born in 1843. Morrison’s genealogy research about her Melungeon heritage helped her discover she had familial Mediterranean fever, even when doctors doubted her. (Photo by Lawrence Pierce/ Charleston Gazette)

Growing up in Charleston, Nancy Sparks Morrison always loved hearing family stories. While the other children played outside, she preferred staying in, listening to relatives tell tales.

When Morrison began researching the family tree on her own, she didn’t expect the multicultural roots she discovered to help solve a medical mystery that had left her debilitated and depressed for much of her adult life.

Morrison believes she is a Melungeon descendant, part of a multiracial group that originally settled in southern Appalachia.

The Melungeon people might originate from Turkish, Spanish, Portuguese, Jewish and Arab immigrants who settled in the region in the 16th century. Because their skin color mutually isolated them from Southern white society, these Mediterranean settlers intermarried with American Indians and Africans in the region, according to the Melungeon Heritage Association.

With light skin and European features, Morrison, 70, was always identified as white. She believed she had American Indian heritage, but that most of her family came from the British Isles and Germany.

There is no test for Melungeon heritage, but DNA work showed that Morrison had African, Eurasian and American Indian matches. Her interest piqued, she eventually traced her paternal DNA to Italy and her maternal DNA to the Syrian plains.

“It’s like opening Christmas presents. You get to a certain point and you’re stopped, but then you find out who the next set of parents were and that opens another box,” Morrison said.

Morrison bears several characteristics, including Asian eyefolds, curved “shovel teeth” and a pronounced ridge at the base of her skull, that indicate her family’s origins. She also had ancestors named Collins, a common Melungeon surname.

Although Morrison was active, working as a schoolteacher and pursuing her interests in drama and genealogy, she often suffered bouts of pain and fever that lasted for weeks or months.

Since infancy, Morrison battled frequent fevers and abdominal pains. Doctors diagnosed her with polio. She had her gallbladder and appendix removed. She was treated for arthritis, sleep apnea, colitis and thyroid problems, but nothing seemed to help.

“Every muscle in my body ached like a toothache,” she said.

Her health declined as she aged. By the time she took early retirement from teaching for the symptoms of fibromyalgia and depression, she had been given 17 diagnoses and was taking 21 medications every day.

“I had depression, anxiety, confusion; I couldn’t balance my checking account,” she said. “Even with an adding machine, I couldn’t add and subtract anymore.”

Doctors, unable to explain her pain, believed Morrison was inventing her symptoms, although she frequently was bedridden, cared for by her husband, Richard. Even Morrison began to wonder if it was all in her head.

Between flare-ups, Morrison remained involved with a mailing list of descendants who decided to hold a Melungeon reunion in 1997. What was planned as a gathering and potluck for 50 people in Wise, Va., attracted about 1,000 attendants.

There, Morrison met Brent Kennedy, a Melungeon researcher and author of the book “The Melungeons: The Resurrection of a Proud People.” Kennedy spoke about his tentative diagnosis with familial Mediterranean fever, an inherited inflammatory disease that affects people of Mediterranean origin, but is rare in white Americans.

In FMF patients, a protein that normally regulates inflammation does not work correctly and the body’s overreaction leads to fever and excessive inflammation, according to the National Institutes of Health.

“Our bodies think when we hit our hand, we’ve cut off our hand,” Morrison said.

There are no Melungeon diseases, but unusual medical problems can be difficult for American doctors to diagnose if they do not know a patient is predisposed because of their exotic heritage, Morrison said.

Morrison was so taken with the similarity between Kennedy’s symptoms and her own, she hugged the researcher.

“I think you just diagnosed what’s wrong with me,” she told him.

Her doctor, though, wasn’t so easily convinced.

“He laughed out loud at me and said, ‘That’s a rare disease, and you don’t have it,'” Morrison said. She saw three more doctors before, in 1998, one skeptically agreed to let her try colchicine, the medication used to treat FMF and gout.

For the first time in years, Morrison stood up from the couch without a struggle and walked halfway to the kitchen for a glass of water before she realized her pain was evaporating.

“Two hours after I took the first pill, I knew it was going to work,” she said. “The depression began to lift. It was like being on an airplane, all surrounded by white fluffy clouds, and then breaking through to the bright blue sky.”

Morrison is careful to say she is not an expert, just a layperson eager to support those facing the same struggles. Since posting her story on the Internet, she has spoken with more than 300 people who have FMF, many who also are Melungeon descendants, she said. She encourages them to trust their instincts.

“I think people need to know their own bodies. If your doctor won’t listen to you, find a doctor who will hear what you have to say,” Morrison said. “And know your history. Everybody ought to know at least four generations back, if just for health issues.”

Although she still suffers occasional attacks, Morrison has her life back, in part to her genealogical detective work.

Morrison, who attended Stonewall Jackson High School in Charleston during segregation in the 1950s, said she is proud of her diverse ancestors, who came together in harmony despite the hardship and discrimination they faced.

“I think it shows how we are all interrelated,” she said. “I just believe in one race — the human race — and I believe in the Melungeon Heritage Association motto: ‘All colors, one people.'”